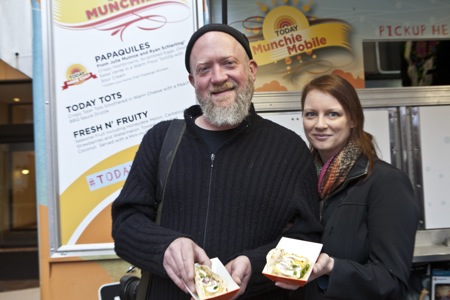 Chances are that when Ryan Schierling and Julie Munroe cooked up a batch of chilaquiles with a nontraditional carbohydrate in their Seattle apartment a couple of years back, they would never have envisioned it being served from a food truck at all hours during SXSW.

But that’s exactly what happened when, by chance, Schierling found a contest on Today.com/foodchallenging readers to submit a Southwestern breakfast recipe to be featured on Today’s Munchie Mobile during SXSW.

“I thought, we definitely have a Southwestern breakfast recipe, so we entered that and crossed our fingers,” says Schierling, a freelance photographer. “Then we put the word out to everyone we knew.”

“We were really surprised to be in final three!” says Munroe, an interior designer.

The papaquiles, as featured on the couple’s blog, Foie Gras Hot Dog, features crispy hash browns as their base instead of tortilla chips, which are then topped with onion, salsa verde, and sour cream. The crowning touch is a fried egg for added richness.

After the papaquiles recipe passed Today Food’s editor Vidya Rao’s initial screening, it was posted onto Today Food’s Facebook page for fans to vote on; the papaquiles won in a landslide with more than 10,000 votes. And the fact that Schierling and Munroe are Austin based is icing.

“We don’t collect any demographic information when we collect the entries because it’s really about the food,” explains Rao. “It’s a great way to showcase our readers. The whole thing about Today Food is that it’s very relatable. You don’t have to be a star chef to use the recipes that are on the Today Food website. It’s the perfect way to spotlight the average reader who likes to do some work in the kitchen but who is not a chef.”

Interested lovers of free food can get a small taste of the papaquiles from the Munchie Mobile through Tuesday, from the hours of 8am-1pm and 10pm-2am at the Courtyard Marriott at 4th and Trinity. (Peached Tortilla founder Eric Silverstein is responsible for developing the rest of the Munchie Mobile menu, which can be seen here. I particularly enjoyed the French toast sticks.)

Can’t make it downtown to sample the papaquiles? Never fear: the recipe can be found here. I know I plan to try them at home as soon as possible!