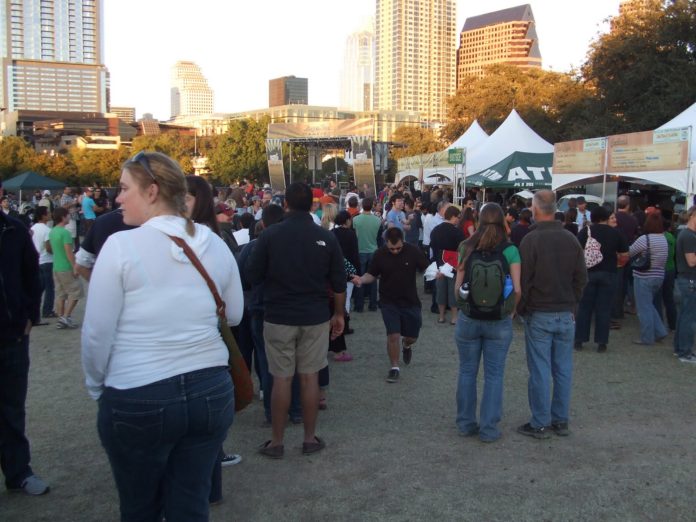 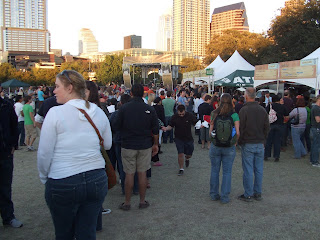 As we have stated in the past, some of the most exciting things about the Austin food scene are the trailers and trucks. In the past, such operations have been derided as so called “roach coaches.” To be honest, I have always felt that the best place to get tacos, burritos and sandwiches is frequently out of a lunch truck. At some point though, things got a little more sophisticated. Things started to move beyond the traditional sandwiches and tacos. Trained chefs started to abandon traditional brick and mortar operations in favor of trucks and trailers.  It only makes sense – now they can offer higher end cuisine with much less overhead and far more freedom of movement. The result has been some extremely high quality and highly creative food. Austin being the kind of town that it is, one that supports the arts and creativity in general, has wholeheartedly embraced this new concept. 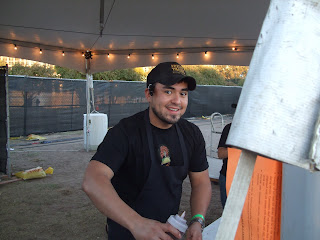 Last weekend, Austin showed its support by holding the Gypsy Picnic: a gathering of 30 local food trailers. While I don’t know how many people were expected to show up, simply calling it ‘well supported’ would be an understatement. There were literally thousands of people milling around, sampling what was offered and basically doing a mini trailer crawl. The nice thing about this event was that all who were able to attend were able to get a good sampling of some of the different trailers here in town. John Galindo, chef/owner of Izzoz Tacos, spotted us and was kind enough to spend a few minutes talking to us. He said that his trailer had been so busy that he actually had to call his main location to have them shut down so that they could bring more product to the Picnic site to replenish his supply. When we made it by his spot, there were what looked like at least 100 people standing in line for his food. And from what John said that was pretty much how his day went. Personally I was glad to see that many people lined up for Izzoz. In my opinion, they are the best of the taco trailers and deserve a huge amount of buzz. Even though he was crazy busy he was still able to spare a quick second with us to talk and pose for a quick photo. Thanks John! 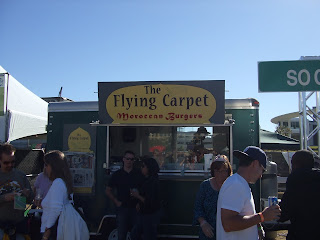 es like Gourdough’s, Izzos, and Man Bites Dog, there were plenty of places we had yet to try and that have now made our list. One of those is the Flying Carpet. This is a trailer that we first saw in the same park as Crepes Mille, and were intrigued. They bill themselves as Moroccan Burgers, but at the Gypsy Picnic they were not serving up any burgers. Instead Dave and I sampled the Beef Kefta and the Chicken and Lentils. While I was hoping for a burger, this was a nice stand in. I look forward to going out and giving them a proper review. 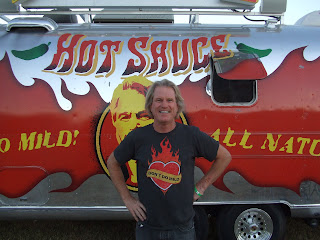 We also gott a couple of Migas tacos from Royitos Hot Sauce Streamer. I know what you’re thinking- you guys went to the biggest trailer event in town and got breakfast tacos? Really? Yes, and there are some important facts to consider here. First, breakfast is what he does. Second, his migas were nothing to scoff at. They came served with a very nice salsa and a generous helping of chips.  We also wanted to try the picadillo, but no such luck this time – he was all out. The fact that all he had left was some absolutely delicious migas tacos should tell you something about the quality of his food. Dave and I also noticed something odd about his tortillas- they were irregularly shaped. That usually indicates a handmade tortilla, which these were. They also had that flavor that you only get from a fresh tortilla. In fact, Roy told us that they had prepared 1,000 tortillas for the event. Now, that’s dedication to your craft! I’d be surprised if they had still had fingerprints left after all that work! Roy was also kind enough to spare a quick second to take a photo. Thanks Roy! We will be stopping by his main trailer soon. If any of our readers get there before us, be sure to drop us a line and let us know what you thought! 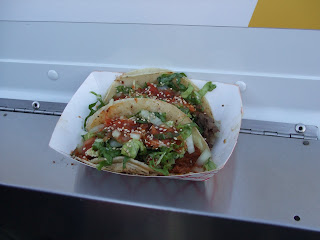 After a good 15 minutes in line, we managed to make it to the front of the line at Chi’Lantro, only to be told that they had to stop taking orders so that they could catch up. Yeah, they were that busy. So we came back about an hour later and waited for a good 30 minutes or more and had one of the best culinary experiences yet – Bulgogi and Pork Bulgogi tacos. Chi’Lantro has been generating a bit of buzz for a while now and after this sampling it’s easy to see why. We are planning to review them this week and I must say we are totally looking forward to it. Chi’Lantro offers up a fusion of Mexican and Korean cuisine, so it’s definitely something to look forward to. 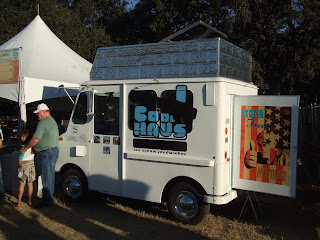 Now what better way to round out an evening than with ice cream and coffee? I stood in what was possibly one of the longest lines of my life to get a couple of cold treats from Cool Haus, a semi-local ice cream purveyor. I first heard of them from my dad. He tried them at a recent festival and immediately told Dave and I that we had to review them. Now my dad knows his ice cream so I was really looking forward to this place. How good was it? There are not words in the English language to describe it. I got two sandwiches, a fig mascarpone and lambrusco. Since they are an out of state company we probably will not be able to give an actual review, but consider this a wholehearted recommendation. No, consider it marching orders. If you get the chance, find out where they’ll be and get some ice cream. You know, they are from L.A. and Dave and I are from L.A. They only have one truck in Austin and it’s owned by Austinites. Maybe we can call a technicality on this one and review them anyway? Hmmm…..I think a staff meeting may be in order. 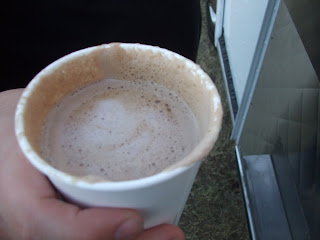 Now on to the coffee. Personally, I’m not a big fan of coffee. Even the “good” stuff just tastes like bad water to me unless you add some chocolate and maybe a little milk. Even then, an acceptable mocha is a hard thing for me to find. So you can imagine my surprise when I got one from Patika Coffee. It was perhaps the best mocha I have ever had. It had enough coffee to still taste like coffee, and enough chocolate and milk to balance out coffee’s inherent nastiness. It should also be pointed out that the chocolate sauce is made in house, not from a squeezy bottle or pump, which makes a huge difference. Dave on the other hand couldn’t disagree more with my opinion of coffee. While he likes a good mocha, his favorite is just plain old black swill. He got himself a french press coffee to round out the evening and had the same opinion as I had of the mocha. In fact he enjoyed it so much so that he recommended we consider them for a review or maybe as a part of a feature on coffee houses. Whichever route we choose, they will certainly be featured. Thanks for a great cup of Joe guys!

Dave and I had a great time attending this event. I’d like to thank the organizers for putting on the event, the trailers for all the great food, and Austin for showing such support of our local entrepreneurs. To any of our readers who have yet to get out some of these trailers, I highly recommend you do so now. It’s some of the best and most creative food you’ve never had. Need help picking a trailer? Just check our archive, or pop on over to Trailer Food Diaries and find a place. Until the next Gypsy Picnic, Keep it Weird Austin!