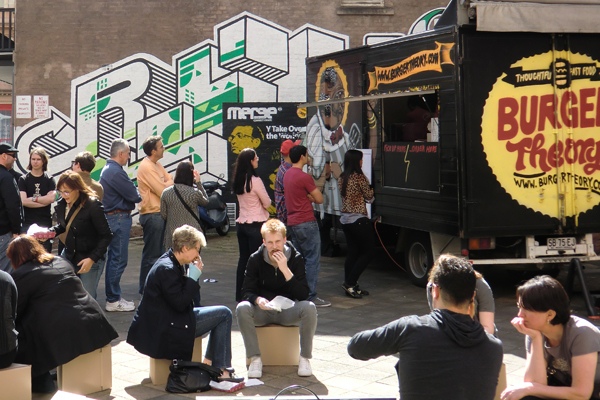 WHEN a couple of young blokes studying theoretical sociology in Adelaide decided to start a burger joint, they didn’t dream that within six months they would be wondering how to manage the business’s growth.

Rob Dean, 29, and Dan Mendelson, 25, hit a major obstacle early on: their nearly non-existent capital and non-existent credit ratings meant they couldn’t get a loan to rent and fit out a shop.

“We were frustrated that we couldn’t deal with anyone at our financial level,” Mr Mendelson said.

Instead, they bought a small light truck, fitted it with a basic burger kitchen, and started trading off the street.

That was about six months ago. Recently, although they were pumping out 90-100 burgers an hour, lunchtime lines at their gaudy truck had become so long that some customers had waited an hour to get their meal.

“It’s crazy,” Mr Mendelson said. “When you look up and see lines like that, with 80 people in them, it’s both spectacular and scary.”

A big part of Burger Theory’s appeal was its burgers, recently voted Australia’s tastiest in a informal one-man survey, but the business’s mobility, the strategy of talking with customers via Twitter, Facebook and a blog, and the general “coolness” of good street food reflect other food truck business successes in the US.

It was also exposing a new group of people to the concept of locally-sourced, high-quality ingredients, at an $8-$10 price point that made these qualities accessible to more people.

Their success – and their alarm at the length of lunchtime lines – meant Burger Theory was now wondering how to expand. Their hearts leant toward another food truck, while practicality leant toward a fixed premises that can handle more volume. Either way, another step is required.

Mr Mendelson thought, if anything, food trucks were going to be even bigger here than in the US, largely because of our climate.

“The future of food in Australia is going to be about accessibility,” he said.