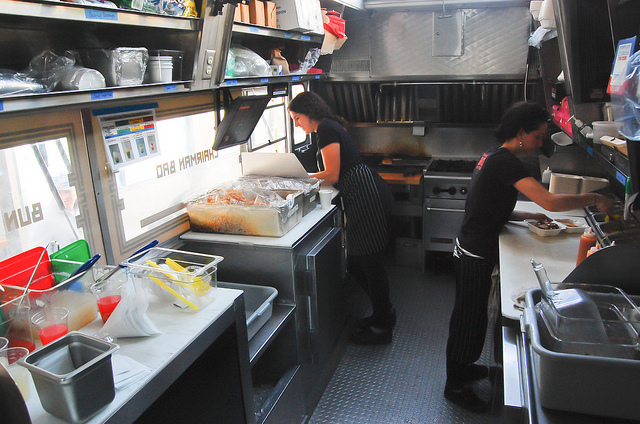 While reporting our story about gourmet food trucks for the New York Times late last year, Telstar Logistics spent a lunch shift hanging out backstage with the crew that operates San Francisco’s popular Chairman Bao truck. An instant hit with foodies from the moment it first hit the streets in early 2010, Chairman Bao serves Chinese-inspired fusion cuisine that is innovative, affordable, and extremely delicious.

The truck itself is a tasty mix of art and science. Wrapped in a distinctive graphic scheme that looks like a cross between a Chinese Cultural Revolution propaganda poster and a Shepard Fairey art project, Chairman Bao’s bold graphics serve a practical purpose: They ensure that the vehicle always stand out, particularly at any one of the organized events in San Francisco where gourmet food trucks gather en masse to create a temporary street food marketplace. Chairman Bao’s success was something of an accident. The truck is operated by Mobi Munch, a San Francisco-based startup that hopes to put hundreds mobile food trucks on the streets nationwide. Mobi Munch won’t staff the trucks; instead, it will rent them on a monthly basis to chefs and brick-and-mortar restaurant operators who want to explore the potential of what Josh Tang, the founder and CEO of Mobi Munch, calls “the mobile platform.” Each Mobi Munch truck will function quite literally as a turnkey system, with a fully equipped kitchen and a pre-installed point-of-sale system connected via wireless networks to a central database. Mobi Munch created Chairman Bao as a proof-of-concept for the business, but it turned out that the truck’s tasty and creative menu earned fans among Bay Area foodies.

As part of its plan to scale the gourmet food truck business, Mobi Munch partnered with Los Angeles-based food truck manufacturer AA Cater Trucks to build and distribute its trucks. “An AA truck is kind of like a Porsche 911,” Tang says. “It’s a vehicle that’s been around for 40 years, so it has real pedigree.” The difference, of course, is that it’s unlikely anyone ever tried to cook 20 pounds of pork belly inside a 911. Yet during a recent lunchtime shift in San Francisco’s Soma district, Rachel Kier (shown at left, below) stood by griddle in side the Chairman Bao truck, doing just that. With nine years of prior restaurant and catering experience, Kier was unfazed by the transition to a truck. “It’s a lot like the restaurants where I’ve worked, and not much more crowded.” she says. “The pace is a lot quicker, but you have all the same equipment. Plus, you get a regular change of scene.” San Francisco, meanwhile, gets a very interesting place to have lunch. Lots more pictures, in our Backstage with Chairman Bao photoset. Go full screen, grab a napkin, and enjoy: