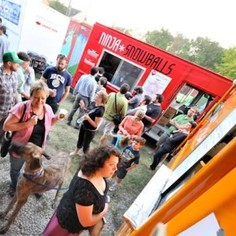 As of this morning, more than 870 people have signed an online petition in opposition to proposed regulations on food truck vendors that will be taken up by the Metro Council today. Placed on the agenda by Councilman R.J. “Smokie” Bourgeois—who is also the owner of George’s restaurants—the regulations would require food truck owners to get written permission from private landowners before setting up shop in their parking lots. Bourgeois says he simply wants to protect landowners from any potential liability. Also, to ensure greater safety, the ordinance would also make it illegal to sell food out of a window that is facing oncoming traffic.

Pat Fellows, owner of Fresh food truck, maintains he and his fellow vendors already regularly get permission from property owners to park in their lots, and would not serve food in a manner that jeopardizes the safety of their customers. Though he sees the regulations as having little impact if passed, Fellows says food vendors nonetheless oppose them, regarding them as unnecessary in themselves and also as an avenue to further regulation. “It doesn’t change how we do business, and if it passes it’s not the end of the world,” Fellows says of the ordinance. “But lets just hope if it does pass, it’s not a gateway for future regulation.” See the online petition here. The Metro Council convenes at City Hall, 222 St. Louis St., at 4 p.m.