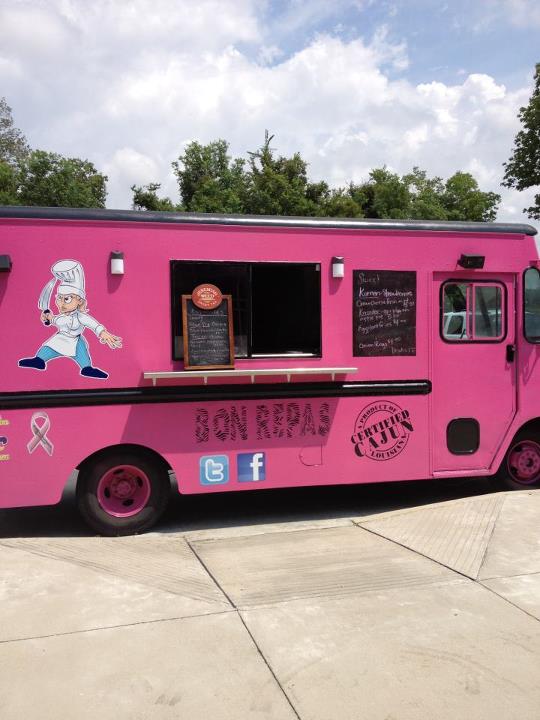 By BETH COLVIN | The Advocate

No matter how you look at it, Chris and Sommer Wadsworth have a full plate.

He’s the general manager and executive chef at Restaurant IPO, 421 Third St., and also has his own catering business, line of seasonings and works as a personal chef. Sommer Wadsworth, formerly a special education teacher, now mans the bright pink Bon Repas food truck, which serves up a variety of empanadas and gives a portion of its proceeds to various charitable causes. And they have a combined six kids.

So maybe full plate is an understatement.

“It’s hell, to be quite honest,” said Sommer Wadsworth, who sprinkles her Tweets with #chefswife. “It’s hell, but it’s rewarding.”

Chris Wadsworth, 34, started working as a culinary professional at 14, using his brother’s ID to snag a job frying fish. He dropped out of school at 16, but took his GED and graduated from the University of Louisiana at Lafayette at 20. Since then, he’s founded his own catering business; worked at Ruth’s Chris Steak House and Café Vermillionville; traveled as a personal chef with the likes of Willie Nelson, Bruce Willis, Bill Gates and Cindy Crawford; started his own commercial line of seasonings under the Bon Repas label; ran a food truck of the same name; and worked as the executive chef at Nottoway Plantation.

That, in itself, is a story.

“I’m probably the only bride who did nothing for her own wedding,” Sommer Wadsworth said. “Wait, I’m sorry. I got the invitations made and printed out the address labels for him. And I told him I wanted to get married at Nottoway.”

When Chris Wadsworth went to try out the food for the reception, he found it wanting.

“They said, ‘Well, you know, we’ve kinda been looking for another chef,’ ” he said.

And that was that. The weekend they married, he worked five weddings. Including his own. That seems fitting, in a way, given the couples’ nonstop, always-going lifestyle.

Now, at IPO, Chris Wadsworth is insistent on doing things his way. Which, as you might imagine, is a little bit out of the box.

“We’ve been doing a lot of off-the-wall stuff,” he said, like their special lobster corndog, a lobster tail dipped in a traditional sweet corn batter and fried, then served with various house-made condiments. “Here, you just never know what you’re going to get.”

IPO’s menu is centered around tapas, or small plates, that veer from the traditional continental offerings into what Chris calls “world-influenced tapas.” His deviled eggs, for instance, include crawfish and tasso and are topped with a fried Louisiana oyster. Most of the dishes have a heavy sprinkling of Louisiana in them as Chris Wadsworth plays with influences, textures and flavors.

“I’m Louisiana through and through,” he said. “But I have a lot of Northern roots.”

This is evident in his choice of mussels in a coconut curry sauce instead of another, more Southern, bivalve. His menu also makes extensive use of candying and pickling techniques, featuring sweet pickled mirlitons and a candied celery that’s reminiscent of dried mango. Candied fennel makes for a surprisingly luscious, citrusy addition to his scallop dish, Divers in Nage, of seared diver scallops in a saffron nage (broth). Another popular dish, Pequeno Tacos, features a redfish ceviche topped with chipotle avocado relish and andouille bacon bits and served on IPO’s house-made flour tortilla taco shells.

Over on the food truck, Sommer Wadsworth’s all-girl crew churns out empanadas like the Louisiana Lady, featuring Louisiana crawfish, au gratin sauce, roasted red peppers and basil. They also make a host of dessert empanadas; the Komen features fresh strawberries, cream cheese, chocolate sauce and mint. A part of the proceeds from the dessert empanadas goes to various charities, such as Komen for the Cure, Kat’s Krusaders for a Cause and Woman’s Hospital.

Bon Repas started out as Chris Wadsworth’s baby, a way to couple Chris’ love of food with his passion to restore old cars and trucks. They found the truck in a field in Prospect and bought it for $800. Its previous owner wasn’t sure it would make it to Lafayette, but it did, and survived its initial conversion to a wrap truck. Since moving to Baton Rouge, Sommer Wadsworth’s taken the wheel so her husband could focus on IPO and its adjacent bar, The Office. The truck has changed identities again to an empananda truck with an all-girl staff.

“By the way, I have no restaurant experience at all. Not even as a teenager. Not even in a fast-food place,” she said.

But she does share Chris’ passion for food and his contagious enthusiasm for feeding the hungry hordes.

Chris and Sommer Wadsworth also make sure to make time for family, and for each other. Sundays, for instance, the food truck and restaurant shut down for a day devoted to church and family.

“We still believe in date night,” Sommer Wadsworth said, as her phone buzzed with a text from Chris. “Since we moved here, we do date night once a week.”

Chris wanted her to make sure to bring something with her to work at date night, which would apparently be at IPO.

“He does try to take time to sit down and eat dinner with me,” Sommer Wadsworth said. “We sit down at the table, like, four different times before we actually sit at the table. It’s date night, per se, because I get to have dinner with my husband without my kids, but to get date night, I have to roll silverware.”

But Sommer and the Wadsworth children are just as dedicated to the restaurant life as Chris Wadsworth is. Four of the children want to go into culinary work. And Sommer Wadsworth loves nothing more than to watch Chris fly around the restaurant.