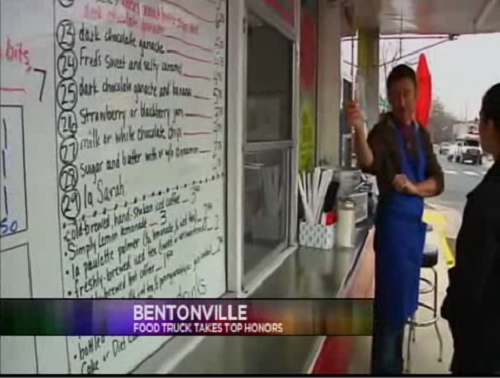 A Bentonville food truck was named one of the top ten in the South by a new magazine.

Crepes Paulette is getting national attention from Deep South Magazine, which ranked the truck number 8 on a list of the best mobile restaurants in the South.
The truck started serving up both sweet and savory options three years ago, and owner Frederic Henry says he originally wanted to open a full scale restaurant with his wife, but found it was too expensive. The couple decided on a food truck instead.
“It was a good choice because it let us make a lot of mistakes, which you probably cannot do as easily with a brick and mortar,” he says.  “We’ve learned a lot and we do things from our point of view much more simply and much more efficiently now.”
Henry says he was pleasantly surprised to find a buckwheat crepe he grew up with, is one of the most popular items on the very large menu.
“Where I’m from in France it’s called Brittany, it’s next to Normandy and it’s the core of that kind of crepe country, so we wanted to share that,” he says. “It’s very rewarding to make something that’s very traditional and being very successful.”
The truck is located just off the Bentonville square, at 213 NE A St. and opens for lunch Wednesday through Sunday.