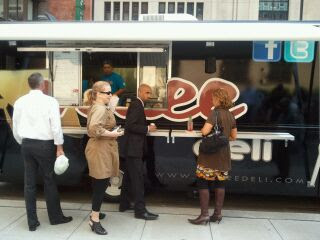 MINNEAPOLIS (WCCO) — Getting a good quality meal, fast, can be difficult, but the emergence of food trucks in the last couple of years is making it a lot easier.

Right now, there’s close to 50 food trucks on the streets of Minneapolis and St. Paul. In fact, if you walk down Marquette Avenue in Minneapolis on a workday, you’re going to pass about 15 to 20 food trucks.

And when WCCO asked you to tell us your favorite, we got votes for just about all of them, but the one that was most often mentioned: Vellee Deli.

“I’ve been to quite a few other trucks but this is the one I always come back to,” said one customer.

Vellee Deli is the brain child of executive chef Joyce Truong and her partner William Xiong, who actually quit his job as a microbiologist when the food truck started to take off.

“It was a scary decision at the time to leave my job because, you know, working in the health industry is a nice field and nice benefits,” he said. “But when you have something good you’ve got to grab onto it and just roll with it.”

His customers are happy he did.

“I think it’s the top food truck definitely that’s down here,” said customer Allison Ratwik. “We rank them in the office and I put out a Facebook poll and everyone seems to like this one the best.”

As for the type of food they’re slinging, well, we’ll leave it to the scientist to explain.

“It’s all incorporated with the Mexican transport system, but then the internals are all Asian,” said Xiong.

The description makes sense once you see their most popular item — the Korean burrito. Vellee Deli gives you the option of adding spice to your order, with their kicker.

“We have one, two, and three kicks. And it just bumps up the flavors and gets your tongue going,” said Xiong.

Very few people dare to try three kicks. After all, It’s never a good sign when they say “good luck” when they give you food.

“If it was food at home or something or on a weekend, maybe I’d go with three kicks, but just as lunch during the work day, I don’t want to get too carried away,” said customer Michael Beasley.

The food is fresh, full of flavor and plenty spicy if you’re up to the challenge. Just don’t jump right to the highest spice level right away, at least not if you have to go right back to work.