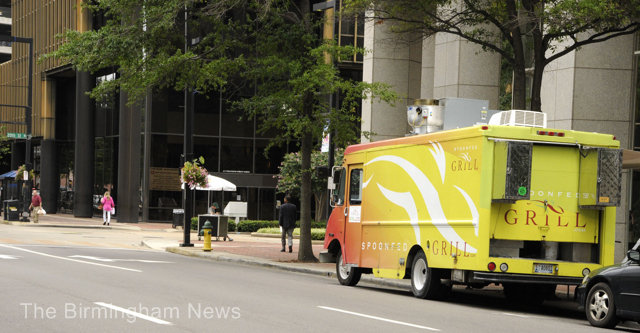 BIRMINGHAM, Alabama — The Birmingham City Council is considering restricting food trucks— restaurants on wheels — after traditional restaurant owners complained that their investments are being threatened by unfair and unregulated competition.

The burgeoning downtown industry brings more options for hungry lunchgoers, but some restaurateurs say the food trucks park in front of their businesses, siphoning away customers.

Austin, chairman of the Public Safety Committee, said in an interview that the city must find a way to balance the needs of existing businesses with the need to promote the entrepreneurial spirit of the food truck operators that are becoming a regular presence downtown.

“We have businesses who are trying to come to the city, do good business, pay taxes and provide a service to the city,” Austin said. “I think we should embrace them and help them grow.”

Austin’s committee Wednesday held its first public hearing about food trucks. Business owners and employees from both sides of the issue appeared, asking for relief and consideration.

“We’re just trying to come up with some kind of ordinance to make everyone as reasonably pleased as we can, knowing that no one is going to be 100 percent happy with what we do,” Abbott said.

A coalition of food truck vendors called the Birmingham Street Food Coalition has created an alternative proposal that is less restrictive. And a petition organized through change.org asks city officials to enact policies that support and promote food trucks rather than box them out.

“Food trucks and food carts add urban charm to our city, and encourage people to socialize in public places (on the street), making our city more vibrant,” the petition reads. “We encourage you to set policies that support them when possible, as long as they are not taking away customers from other small, locally owned restaurants.”

By Wednesday, the petition had nearly 600 signatures. The listed signature goal is 1,000, bumped up from an earlier goal of 500.

Brad Johnson, who owns Chick-fil-A on Fifth Avenue North, where the Spoonfed Grill and Shindigs Catering trucks park a couple of days a week, spoke in favor of the new rules. The trucks take up parking spaces in front of his business and drive away customers, he said.

“If you look at major cities across the country, there is at least a distance between the brick-and-mortar establishments and the food trucks,” Johnson said. “On any given day I have three food trucks within 200 feet of my store. It’s taking away parking from established restaurants that have been there that pay rent and pay taxes.”

On the other side, Michael Brandon, a chef and partner with Spoonfed Grill, said the trucks have brought new energy to downtown.

“We are trying to bring a national trend to Birmingham to help liven up the central business district,” Brandon said.

The food truck operators said they will be unable to survive if they are restricted from the high-traffic areas downtown. The food trucks represented included Spoonfed Grill, Shindigs Catering, Dreamcakes and Cantina on Wheels. Both Dreamcakes and the Cantina also have brick-and-mortar businesses.

In the middle of the debate is Operation New Birmingham, the business group created to support downtown business and development.

ONB President David Fleming said ONB for more than two years has worked with downtown restaurants and food truck owners to find a solution. Fleming said his group’s research shows that the new food trucks are positive elements to the city center and complement neighboring businesses.

“Additionally, most responsible and progressive cities, in dealing with the issue, have sought a balance that protects the market interest and investment of brick-and-mortar restaurants while providing food truck operators and the public that wants them reasonable access to each other,” Fleming said. “After analyzing the draft legislation currently being considered by the Public Safety Committee of the Birmingham City Council, it is clear that revisions are needed in order to create an equitable and profitable operating environment for restaurants and food trucks.”

Austin called Wednesday’s initial conversations helpful as the council revises the proposed ordinance. A public hearing before the full council is set for late August.

Austin said the council should consider lessening the proposed 200-foot distance required between food trucks and existing businesses, which a vendor in Wednesday’s hearing called too severe.

“As with any new law or changes that are being made, we always have an opportunity to modify them until we get to the point were can present it to the full council to vote it up or down,” Austin said.