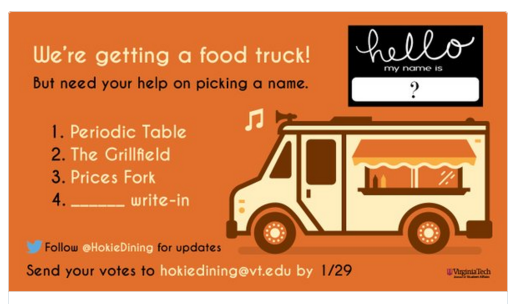 Two campuswide food trucks will be ready by the fall 2016 semester, bringing flexibility to campus food with fresh menus.

“We want to bring it together in such a way that it’s just a little bit different than it would normally be served,” said Randy Van Dyke, executive chef. “We’re looking for the fun and excitement in that area; something new, exciting, out of the box.”

The Bioinformatics Institute, Oak Lane, Perry Street, Alumni Drive and College Avenue are stops under consideration. The trucks are scheduled to arrive three times per day at each stop, during lunch, dinner and late nights.

“Maybe Oak Lane at dinner time, since not a whole lot of people are over there during the daytime, and then late night, where we could possibly put it to take some pressure off DX, which, on a Thursday or Friday night, just gets slammed,” said Bill Hess, associate director for dining services. “Two trucks, if they do a thousand total transactions a day — when you look at West End that does 6,000 or Turner that does 12-13,000 or Owens that does 5,000 transactions a day — no, you’re not going to see much of an impact on Turner at lunch rush. We know there are going to be lines.”

The food trucks will serve completely new dishes compared to the dining halls. Meal plans, cash and cards will be accepted. The price range will be between $5 and $8 before dining plan discounts.

“I think it’s a good idea. As a person who lives off campus, I don’t try to cross the Drillfield too much,” said Brandon Kim, a junior BIT major. “If there’s more variety on the academic side, it would be better. The only places you can eat on the academic side are Turner and Subway, and Turner gets too crowded.”

Both food trucks are still under development as dining services welcomes student feedback. Until Friday, Jan. 29, students are invited to vote or submit an original name in a contest. “The Grillfield,” “Periodic Table” and “Prices Fork” are three of the candidates. 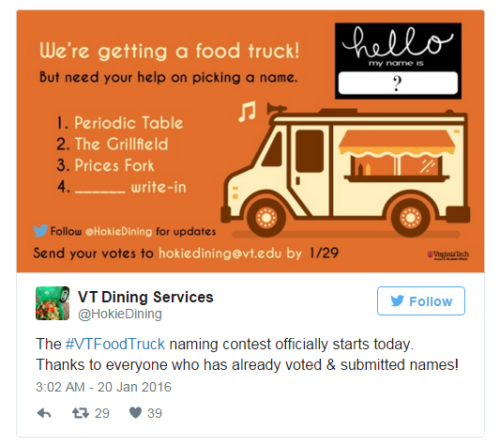 The menus for the two trucks will feature street food inspired by various cultures from around the world, including India, Vietnam, Korea, Latin America and the southern United States.

Like most food trucks, both will have compact menus, with fewer than 10 items and plenty of customizable options. One menu will begin with a rice- or noodle-base option and the other will begin with a bolillo bun or tortilla base. Students can create unique combinations from there.

Select entrees will be served at East Side Deli in D2 dining hall for sampling and feedback from Monday, Jan. 25 until Friday, Apr. 1. A final menu will be ready by reading day, Thursday, May 5.

“It’s going to provide a different experience for the students,” said Victoria Boatwright, web developer and social and print media coordinator for Dining Services. “A lot of alumni, too, are like, ‘What? I wish that was here when I was here!’ They want to come back to campus and see it.”

The trucks will be making their way around campus by the fall, but dining services hopes for an early debut by summer.

“It’s to add to our portfolio of excellent food,” Hess said. “I want to have fun with the food truck. It needs to be fun, interesting food, but very good food. I think some of it has to be a surprise.”