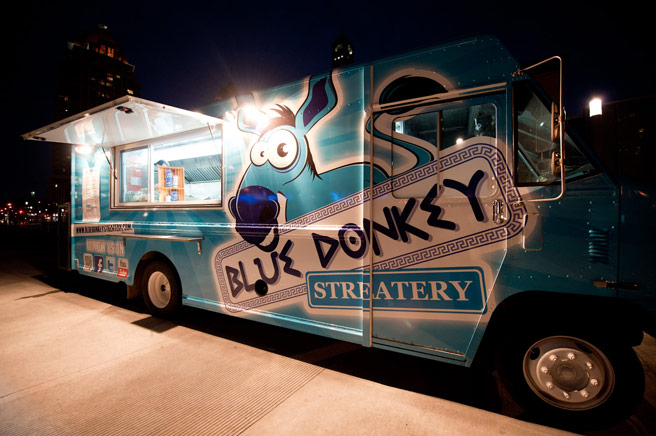 The Blue Donkey Streatery, Missisauga’s newest food truck, is decked out in blue and white, with a big cartoon donkey on the side. Like most things about thi

s operation, it’s a gloriously unsubtle reference to owners Tony Vastis, Elias Vastis, Dimitri Velonis and Manny Tsouvalas’s Greek heritage. The foursome—after assorted experience in the food industry (Sneaky Dee’s, Caffe Demetre, the Drake Hotel Café) and traditional hot dog stands across the city—got their big break when they were turned down by the notorious Toronto A La Cart program, only to be offered a vendor space in Mississauga’s new Celebration Square.

Running on two 100-pound propane tanks (with a gas generator for electricity), the truck has two standard refrigerators with freezers on top, two gyros rotisseries, a grill, a flat-top, a fryer, a mise-en-place prep space and just enough counter for food assembly. Like a donkey, the truck is slow and steady yet reliable (i.e., it maxes out at about 80 km/h).

The menu of “gourmet food at street prices” tops out at $8 and is mostly Greek with a few Canadian touches, like the obligatory poutine. Diners can choose from classics like grilled souvlaki on a pita (chicken $5.50, pork $5), gyros on a pita (chicken $5.50, beef $5, chicken/beef mix $5.25) or Greek salad (small $4.50, large $7.50). There’s also a fried calamari pita ($4.75)—with Greek salad, tzatziki and hand-cut fries—and a Greek grilled cheese ($4.75) with spicy feta, tomatoes, Greek cheeses and fries. The Greek poutine ($4.50–$5.50) douses hand-cut fries with homemade gravy and feta (along with a medley of other cheeses). The whole thing can also be stuffed into a pita for a gyros poutine (chicken $7, beef $6.50). For dessert, the Blue Donkey offers “honey and pita sticks” ($2.50), a kind of loukoumades gone street: thin slices of pita bread are deep-fried, drizzled with Greek honey and sprinkled with cinnamon.

Open now for its second week, the Blue Donkey is most often parked in the square from 11 a.m. to 7 p.m. Torontonians not quite moved to venture so far west will be able to catch the truck at future Food Truck Eats events and at festivals around the city. In true food truck fashion, you can get its location via Twitter or Facebook.