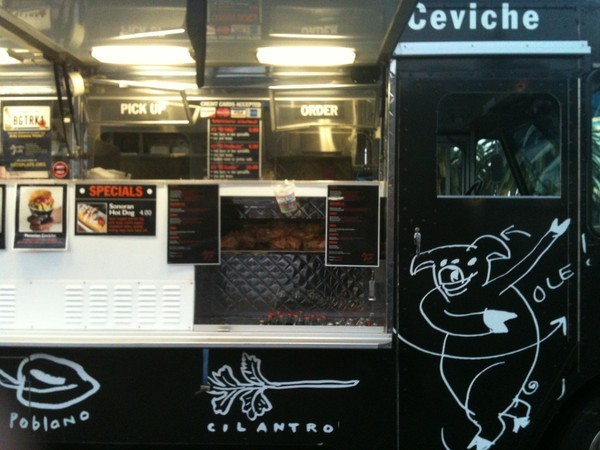 The famed restaurant’s food truck serves up California-infused Mexican Food for a fraction of the cost.

There are almost as many food trucks as there are Mexican joints here, so how can you possibly compete in this over-saturated pond? The answer may be to step completely outside of the competition, creating Mexican cuisine that, while delicious, could never ever pass itself off as traditional.

The Border Grill Truck is a bit unusual in the LA food truck tapestry, as it is not a stand-alone entity, but rather an offshoot of the popular, gourmet Mexican restaurant, Border Grill, with outposts outside West Hollywood in both Santa Monica and downtown LA.

This particular truck makes explicit something that is often implied within the LA food truck scene—that by eliminating all the overhead that comes with a full-service restaurant, these trucks allow customers to get a taste of a high-class meal at a fraction of the cost.

Ceviche, a combination of raw seafood that is lightly cooked by the acid in the marinade, will run upwards of $20 as an appetizer in most restaurants. At the Border Grill truck, you can get a delicious version for just $5. Called a Peruvian ceviche, the Border Grill Truck dish features big hunks of fish infused with a potent blast of lime and ginger.

This is distinctly California Mexican food, with a bright, acidic freshness replacing the intense, greasy heat that you will find at spots serving up more classical fare. They have a pork taco, for instance, with the same achingly soft carnitas-style pork that you can find all over the city, but the Border Grill condiments of crisp pickled onions and an intense orange salsa are distinctly LA, a fruity contrast with the savory meat.

Jim Rodman, 26, a West Hollywood resident and frequent food truck patron says that he loves the food truck culture for these very reasons.

“When you’re just ordering from a truck, it’s easier to try more unusual things,” he said. “I’d buy stuff off a food truck that I wouldn’t normally try in a restaurant,” he stated before ordering a special bacon wrapped hot dog with chili, cheese curds, and at least six other crazy condiments.

Another Weho native, 25-year-old Annabeth Bondor-Stone agrees. “The quality of food that you can find in these trucks is amazing, she said. “This one is obvious, because it’s the same food you can get at the restaurant, but there are lots of others that are just trucks and still serve up some of the best food you can find in the neighborhood.”

The Border Grill Truck changes its locations every week. You can find an up-to-date schedule on their website.