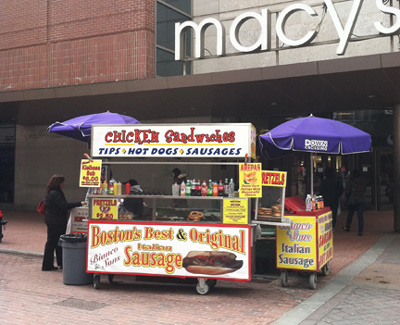 The pushcarts of Downtown Crossing have to leave their posts by the end of this month per an order from the Downtown Boston Business Improvement District. The Globereports that the announcement is “angering many of the 26 vendors,” many of whom were caught unprepared. It’s not necessarily the altogether end of the pushcarts, some of which sell foodstuffs likes sandwiches, pretzels and produce. A “smaller, improved initiative” is planned for 2014 and an interim pushcart program is slated to go into effect later this spring: current vendors can apply to be part of it.

Still, they have to leave in a matter of weeks. Why? The REAL Downtown Crossing Page addresses that question via Facebook, saying “It seems the right thing to do would be to upgrade the pushcart program now, have a seamless transition to a new vending program and include the current vendors…. There should, at the very least be a dialogue and a guarantee to include the businesses that have made it this far through the difficult times.”