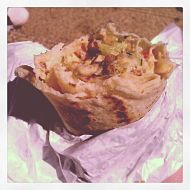 A worthy goal indeed. Limeduck has seized upon food-truck season with a rumbling urgency, setting forth the task of eating at every single food truck at Boston City Hall Plaza. Well, someone’s got to do it, right? Sadly and strangely, M&M and Boston Speed Dog were no shows.

Yes, for all the talk about M&M Ribs expanding, Limeduck led off with a trip to the truck, only to court disappointment. The truck just … never showed! So instead it was a gooey pit-stop at Savory Food Truck, a “serious old school Boston Food truck business. They rocked a plain white truck with the menu written right on the side in magic marker more than a decade before Clover hit the scene.” Nothing like oily Chinese food in a bulging styrofoam tray. Except maybe ribs…

The next day, Limeduck searched in vain for the beloved Boston Speed Dog, which had gone MIA to “fetch a truck.” Uh, isn’t a truck key to business when you’re, you know, operating a food truck business? Anyway, this resulted in Limeduck enjoying the delicacies at Chubby Chickpea, where the “pita was on the thick side” and the falafel was filling.

All’s well that end’s well, though we’re heartened to know that, on Day Three of the experiment, Paris Creperie actually bucked the trend and showed up when and where they were supposed to. C’est la vie? [Limeduck]