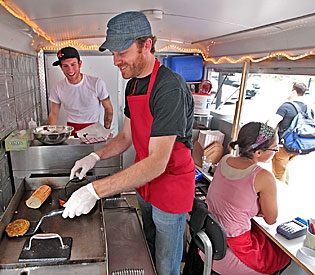 The food trucks — and carts and trailers and bikes — are here!

Nancy Brennan, executive director of the Rose Kennedy Greenway Conservancy, said her organization put a lot of thought into what kinds of foods would be sold on the Greenway — and where.

“We intentionally reached out to have greater diversity of vendors,” she said. “Plus, we thought about how to place people in rough juxtaposition to each other so (that) they are an easy walk to satisfy everybody.”

“You go to Europe and you see street markets all over the place,” Colbert said. “We’re trying to prove open air markets can exist in America — even year round. We were here all winter long, believe it or not.”

David Levy has been eating from the Greenway’s food trucks since he started working in the area a year ago.

“It’s an opportunity to stretch my legs and get outside, even in the winter,” he said as he waited to order lunch at Lefty’s Silver Cart. “It’s really easy in this neighborhood to just go to the two or three places that are directly across the street from you.”

Lefty’s Silver Cart owner Phillip Francis says that dining at a food cart has its own unique appeal.

“You’re right here. You’re watching your sandwich being made before your eyes,” he said. “Another thing that intrigues people is that it’s impressive to see you can create so much food, and so much high quality food, out of such a confined space.”

Francis is one of many vendors committed to putting the “green” in Greenway.

“It’s a small, little thing, but it gives people a very visceral picture of what it takes to produce energy,” Francis said.

According to the 2011/2012 Zagat Boston Restaurants guide, a whopping 79 percent of Hub respondents had never eaten at a food truck.

“I think that will change,” said Silk Road BBQ customer Mike McDonald. “I think the food carts down here . . . are a higher quality than most people are used to at a food cart.”