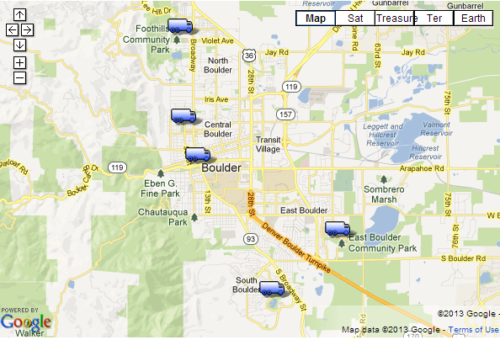 Food trucks might be getting more room to roam in Boulder.

The city of Boulder is considering a summer pilot program that would allow licensed food trucks not only to operate at some city parks but also to offer late-night business in downtown Boulder.

The permitted number of food trucks and times of operation vary by location.

Additionally, officials for Boulder’s Downtown & University Hill Management Division and Parking Services are hashing out a summertime pilot program for late-night service. Under the proposed program, a couple of mobile food vendors could operate at the Park Central parking lot, near Arapahoe Avenue and Broadway, and serve from 11 p.m. to 3 a.m. on Thursday, Friday and Saturday nights.

The city also is conducting an online survey to obtain feedback about the program, which would require a go-ahead from the Boulder City Council. The council is expected to consider the mobile vending pilot programs next month.

“We established some basic food truck policies a couple years ago,” said Suzanne Jones, a Boulder City Council member. “Now it’s time to take a look at those and tweak them, and also see if we can at least respond to additional desires on the part of the food truck community to see if we can’t expand upon what has worked well so far.”

If the pilot programs are approved, city officials will evaluate their effects.

The proposed pilot programs come two years after the city expanded its code on mobile vending to respond to a growing number of food trucks.

In an effort to strike a balance between the food trucks and brick-and-mortar operations, city officials established boundaries on operating times and locations. Food trucks are allowed to operate in rights-of-way in industrial zones and also in business, mixed-use and downtown zones with property owner approval, but they cannot operate within 150 feet of restaurants and residential districts.

The regulations have hindered the potential growth of food truck businesses, said Lindsey Mandel, co-owner of the RollinGreens food truck. She estimated the truck’s sales could be triple what they are now if it was allowed to move freely in areas such as downtown Boulder.

Mandel said she understands the competitive concerns from brick-and-mortar restaurants, but she believes the two can coexist. She noted a recent trip to Washington, D.C., where she saw “hundreds of trucks lined up and there’s lines out the door, but there’s also lines out the door for the restaurants as well.”

The food trucks operate a different dining experience than a sit-down establishment, he said.

“(Food trucks) have been pretty handcuffed right up until now,” Query said. “It’ll make all the restaurants work harder and smarter and try to keep all the people in our seats.”

But downtown restaurant operators have expressed many concerns and fears about food trucks rolling up and affecting business, said Sean Maher, executive director for Downtown Boulder Inc., the nonprofit organization that represents the area’s businesses.

“We have 100 food outlets downtown; it’s probably one of the most concentrated and competitive districts in the country, and they pay huge rents to be down here and huge monthly overhead,” he said. “We support food trucks, just not right in the downtown core where they have an incredible competitive advantage over restaurants.”

City officials looked to find further middle ground when laying the groundwork for the potential pilot program. The late-night program, for example, is outside the downtown core and conducted after the neighboring Mustard’s Last Stand and Alfalfa’s have closed.

“We think it’s far enough away,” said Molly Winter, director of the downtown and parking services division. “We’re not recommending any changes to the current regulations to the downtown core.”

The proposed parks program builds off an effort last summer to have some food trucks serve parks, said Sarah DeSouza, senior manager of communications, marketing and partnerships for the city’s Parks and Recreation department.

The food trucks that took part in that initial effort did not bring in much business, but they believed there might be more strength in numbers, she said.

The latest proposed parks pilot program is meant to respond to food truck operators’ requests to set up in block party-like “pods” and serve neighborhoods.

“We’re amenable to mobile vendors coming in,” she said. “We see that mobile vending is a real community enhancement (at the parks).”

“There will be concessions there for the summer activities,” he said.

Slager added that he hopes the city might go as far as to open up areas around University Hill and the University of Colorado and also ease restrictions on late-night operations.

“But all in all, the fact that they’re backing us and starting to open doors for us, I think is great,” he said.