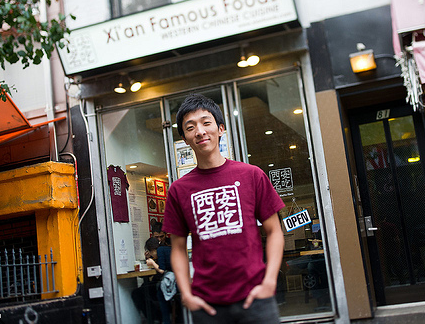 Jason Wang, 24, spearheaded the recent opening of Biang!, Flushing’s first Chinese restaurant to have gentle lighting and a modern industrial design. He and his father, David Shi, have gained a cult following the past few years for their street food-style chain, Xi’an Famous Foods, but Biang! offers a full-service, sit-down experience. In between running errands and paying visits to various branches, Wang took a few minutes this afternoon to chat over the phone.

When I ate at Biang! I realized it was the first time I’d been to a Flushing Chinese restaurant that didn’t have fluorescent lighting. Why do all Chinese restaurants seem to favor it?
I don’t think they favor it, it’s just about cost efficiency. It’s not a cultural thing. If it were up to my dad we’d still be having energy-saving lights. I don’t like the feel of fluorescents myself and don’t use any fluorescent lighting at home either. That kind of lighting doesn’t enhance the food. In China there are well-designed restaurants in the big cities. The Chinese restaurants in Flushing and in Chinatown don’t really represent true Chinese culture as it is today. It’s more about the Chinese immigrant experience in America.

I saw some young people eating the lamb burger with chopsticks. Is it bad manners to eat with your hands?
Maybe they were just trying to be clean. Or maybe it’s because they were with their friends and didn’t want to look too casual in the restaurant. In my experience breaking bread is very American. You would not see Chinese people doing that, but really, it’s whatever works. I eat burgers with my hands.

You’ve got lamb eyeballs on the menu (in a dish that also includes lamb cheeks, tongue and palate). How many do you sell a week?
Each head makes three or four orders and we sell them at all our stores so we probably go through a dozen heads a week. It’s a very small part of our business.

What does a lamb eyeball taste like?
Pretty fatty. It contrasts with the rest of the dish — lamb tongue is chewy, the palate is crunchy since it’s pretty much cartilage and the lamb cheeks are lean meat.

How many eyeballs do you get per order?
It’s varies but usually up to one. They’re sliced. If you see a circular disc of white with a pupil in the middle, that’s eyeball.

Do mostly Chinese people order it?
Half and half, for the novelty of it. I thought only a couple of people would dare to try it, it’s so freaky.

You’ve got a lot of accessible noodle dishes but you also have boiled beef stomach skewers and cubes of pig blood tofu. What’s that like?
We’re taking the pig blood tofu off the menu. It’s black, not that popular and not that great. We’re still experimenting. We’ve added new dishes like mung bean jelly, a Northern Asian thing. It’s a savory cake, gelatin-like, cut into thick slivers, served cold. We’ve replaced our steamed buns with tiny, tiny buns about the size of half dollars, filled with lamb or pork. They’re bite-size, eight to an order. And for a vegetarian option we have tofu skin skewers now.

Your place is full of stylish Chinese kids. They had to wait a long time to get this kind of restaurant in their neighborhood.
The young people are also flocking to the New World Mall in Flushing. It’s styled after a suburban American mall and has a food court and a big grocery store on the ground floor. A lot of people have asked, ‘Why aren’t you there?’ First of all the rents are ridiculous, cut-throat. The food there isn’t that great and it’s overpriced for what it is. I live in Flushing and when I want to eat I want it to be fast and with table service. Before, there were two kinds of restaurants, family-style with florescent lighting or food stalls for a quick bite. There was no medium. Biang! is good for dates and small groups. It’s more Manhattan.

What plans do you have for expansion?
There’s nothing definite in the works, we’ve been so overwhelmed, but we’ve been looking into working with someone else on food trucks. We don’t see it coming to fruition until probably next year. Our commissary, on the border of East Williamsburg and Greenpoint, is now operating, making food for all our stores. We should have a Xi’An Famous Foods storefront there by next year, sort of like Momofuku’s Milk Bar. I’m also looking to see if we can do pop-ups in Boston or on the West Coast. We want to let people know what our food is all about, and give a chance for our fans in other cities to have it.

What do you do for fun when you’re not working?
I work pretty much all the time, day and night. Whatever time I can get off I go out with some friends. I’m kind of a perfectionist and if things are out of my control it drives me nuts. I’m OK for the time being. It’ll be harder to work when I’m older so I might as well suck it up now and take a break later.