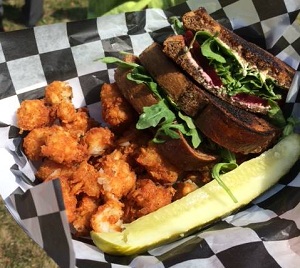 With food trucks prospering as legitimate local food options in Western New York, it was a matter of time before the trend extended to the area’s biggest university.

The 30-foot-long Big Blue food truck, the product of the University at Buffalo’s affiliated Campus Dining and Shops, will begin service at noon before the Bulls’ men’s football game against Duquesne, which kicks off at 3:30 p.m. Saturday in UB Stadium.

Big Blue — not to be confused with former Blue Lantern food truck da Blue — will park in front of Bissell Hall on North Campus [labeled by the red “Here” on the map below] before the football game, offering lunch for those tailgating or enjoying the Easton Corbin country concert at 1:30 p.m. in Stampede Square. 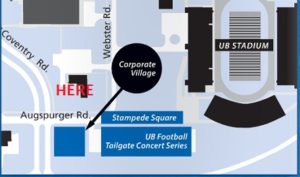 According to the UB press release, Big Blue is no hastily constructed food truck — Campus Dining’s executive director, Jeff Brady, and his colleagues visited more than 140 food trucks in the Northeast for insight into owning and operating a food truck, then designed and executed the mobile-food vehicle with the aid of focus groups comprising UB students, faculty and staff.

Previously, independent Buffalo food trucks occasionally served lunch at local colleges — one of the more aggressive attempts was Lloyd Taco Trucks dedicating a truck from its fleet to Buffalo State College while school was in session.

The cost of Big Blue’s menu items will range between $4 and $8, while cash, credit and UB dining cards will be accepted. Although official operating hours won’t be announced until the truck’s debut tomorrow, the release explained that Big Blue will serve North Campus on Mondays, Wednesdays and Fridays, and South Campus on Tuesdays and Thursdays during the day– as well as Thursday, Friday and Saturday nights. The truck is slated to appear at UB’s major campus events, as well. 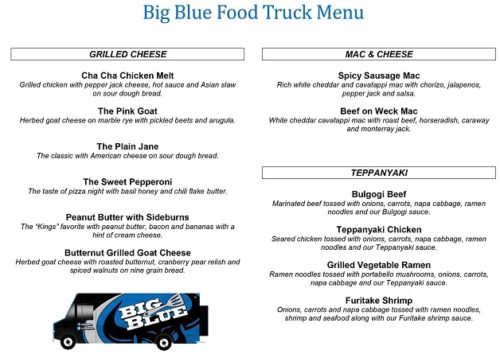 The varieties of grilled cheese and macaroni and cheese are expected to rotate as the semester unfolds, in addition to possible changes in Teppanyaki, which refers to the Japanese-influenced cuisine broiled on a steel or iron grill.

(We’ve got our eyes on the Teppanyaki chicken, for what it’s worth.)

If Big Blue is a roaring success, a smaller truck called Baby Blue will follow in its tire-tracks.

In the meantime, if you see a massive blue truck lumbering down Main Street, honk at the behemoth that’s reshaping the image of local campus dining.

You can find Big Blue on Facebook orTwitter at @UBBigBlue for further updates and menu changes.