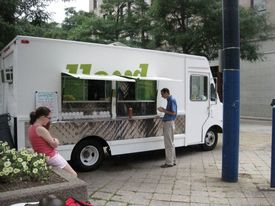 As promised, here are my thoughts about the Food Truck public hearing at City Hall yesterday:

1. It was striking that only one person spoke in opposition to the food trucks.  John Fusco of Zetti’s has become something of an unintentional internet phenomenon with his focus on restrooms and his strong New York accent, but upon reflection, boycotting these restaurants isn’t the answer. I know Fusco, and he’s a good guy. I disagree strongly with what he said, but I appreciate that he was the solitary truck opponent to get up and voice his concerns. I have a bigger problem with the other restaurants, who put on a conciliatory public face while trying to kill or hyper-restrict the trucks.

2. The truck owners were very eloquent advocates for their cause. Pete Cimino of Where’s Lloyd was especially passionate and really killed it.

3. The Common Councilmembers who were present (all except Mickey Kearns) all seemed to indicate that they were willing to pass a law to regulate (in a good way) food trucks, and are concerned about the time, place, and manner details. This is the sausage-making that most people ignore, but is critically important.

4. The resolution at the end of the meeting was that the trucks and restaurants put their heads together and come up with a set of rules that everyone can live with. It is hoped that recommendations from this advisory committee will be completed within 30 days, in the hope that the law can be changed by November.

5. Going back to that word – “regulation”. It sometimes gets an undeserved bad rap. Regulating food trucks with time, place, and manner restrictions is a massive improvement over the status quo, whereby the trucks are prohibited from working the streets and setting up just about anywhere except on private property, or in locations for which they have a permit.

6. The story told by architect and developer Steve Carmina was startling. He owns a building at Main & Mohawk that likely wouldn’t have been leased had Lloyd’s taco truck not set up there and made that corner a destination of sorts a few days per week. That stretch of Main Street is especially bleak and depressing, but when that truck is there, it acts as a magnet for people from all over the city and region. He gave the truck credit for that pedestrian traffic and resulting economic activity, which in effect revitalized that corner.

7. There has been some “first world problems” and “stuff white people like” type criticism over this issue. I get it. But scratch the surface, and this is an issue that has plagued Buffalo for years – the city’s business friendliness. There’s loads of reasons why Buffalo’s downtown business district is a bleak shell even between 9 – 5 on a weekday.  Further restrictions on mobile businesses will only help to perpetuate that – ease them and perhaps it’ll change.

8. The food trucks are at a seasonal disadvantage. When the temperature drops, their customers won’t take kindly to standing in line for an extended period of time exposed to the elements. The regulations the city imposes should be eased between November – March to let the food trucks more easily find customers.

9. Two people spoke, expressing to the Council that they were prepared to invest huge money into their own food trucks, but not until the legal uncertainties were resolved. That’s the real-life consequence of slow action on needed legislation.

10. It’s great that people are taking an interest in this political process.  Hopefully, they’ll recognize that almost all of Buffalo’s problems have political solutions and they’ll become more involved and active.

11. I will try to keep on top of the committee’s work and report what sort of progress is being made, and what sort of nonsense might be taking place.

12. The legislative process is silly and slow, but the city, her leaders, and their staff are listening. A petition posted earlier this week has garnered over 4,300 signatures solely based on social media.  Each time that petition was signed, that signature was sent via email to each Councilmember and the head of Buffalo Place.

13. The Mayor’s office has been characteristically silent. Typical. Why is he letting the Council lead on this issue? Why isn’t the Mayor taking a stand one way or another – why isn’t he saying anything about what is at its core a story about how the city deals with businesses, and how quickly it adapts to novelty? To my mind, Byron Brown should spend the next week sampling the wares at each of the trucks, listening to their concerns and stories.  He should be thanking them for enhancing the quality of life downtown. Because he’s a politician, he should also be listening to the concerned restaurants.  He should also then be using his office to be a leader, and help bring about a fair resolution that is a win for everyone. We don’t have a mayor like that, apparently. This issue underscores what a disappointment that is.

UPDATE: 14. I forgot to add the most important part. SUPPORT YOUR LOCAL FOOD TRUCKS.