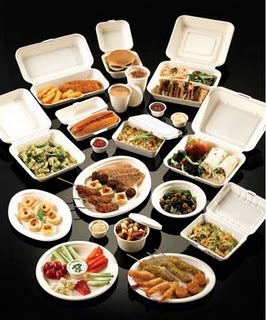 BURLINGAME — Local food vendors are finding the possibility of a ban on plastic foam food containers easy to stomach, with many already using environmentally friendly containers and others in the process of switching.

“We are phasing out our Styrofoam soup and salad containers,” said Azzam Shibli, owner of Piazza Italian Cafe on Primrose Road in downtown Burlingame. He and his wife, Shaza, have owned the cafe for the last four years and already use paper receptacles for beverages.

The proposed ban would prohibit restaurants, food trucks and other vendors from using takeout containers made of polystyrene, the material in plastic foam and other types of packaging. Burlingame is considering the adoption of an ordinance that San Mateo County is pursuing and is set to consider it in May. If adopted, it would likely go into effect next year.

Shibli said a week’s supply is 500 food containers, which runs him a couple hundred dollars.

“The new ones will be double that,” the restaurateur said, but he’s not upset over the cost. He acknowledged that in today’s economy, “you want to shrink expenses,” but he believes the environmentally friendly receptacles will make up for it by increasing his business.

June Mejias, who stopped for a cappuccino Thursday at La Boheme on Burlingame Avenue, agreed.

“Doesn’t it take thousands of years for one Styrofoam cup to break down?” Mejias said.

“Plus, you can’t just pop a takeout dinner in the microwave if it’s in Styrofoam. Sustainable packaging is an attraction.”

Plastic foam isn’t the only type of packaging that doesn’t biodegrade. “Most traditional materials made out of plastics will not break down,” said Mike Levy, senior director of the plastics food-service packaging group for the American Chemistry Council.

At Blush, an organic frozen yogurt shop on Donnelly Avenue, it’s clear that recycling and reuse are important values. The green theme is reflected in the store’s recycled, green-colored tabletops and floors.

Owner Frank Kim said he has always used paper and biodegradable spoons. The latter are made from potatoes, he said.

Sustainable materials such as aluminum, paper and cardboard are generally more expensive than Styrofoam. For example, it costs $24 to buy a 1,000-unit case of 12-ounce Styrofoam hot bowls at Jetro Cash and Carry, a food-service supplier in Oakland, while a case of 12-ounce environmentally friendly paper hot bowls costs $45.

Francesca Tashjian, who has owned Alana’s Cafe in downtown Burlingame since 1993, said that she, like Azzam Shibli, is not concerned about the cost. Also like Shibli, she does not intend to pass the cost on to her customers.

“The only thing we raise prices on is food cost — if eggs doubled, or milk doubled, or cheese doubled,” Tashjian said.

The real challenge is managing the switch, she said. “You’ve been doing things a certain way for so many years.”

Nevertheless, she said, “I feel good about the change.”