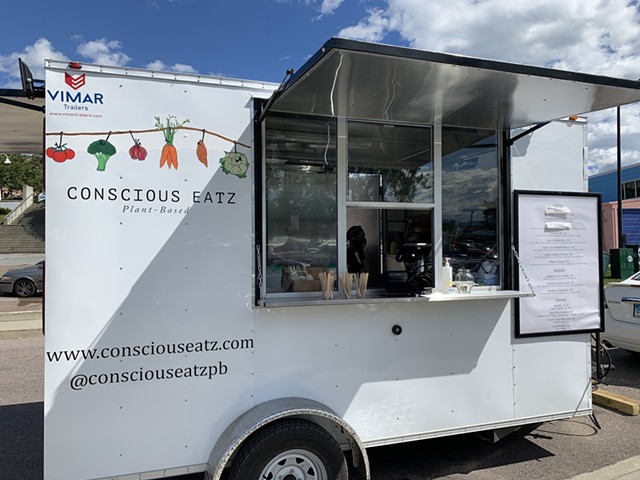 Burlington’s vegan scene got a bit bigger — and more mobile — this month.

Conscious Eatz rolled into town on September 3, spending a week down near the waterfront before parking in its current location near the top of the Church Street Marketplace at 6 Clarke Street.

Partners Jane Morgan and Tyler Weith have followed a plant-based diet for a few years. After moving back to Burlington last summer, they noticed a “major gap in vegan and vegetarian foods,” Morgan said.

“For such a progressive city, it really surprised us that there weren’t more options,” she continued. “We love to cook, and love to make plant-based things, so we figured we could bring plant-based options to Burlington in a really approachable way.”

Approachability is key to the food truck’s menu. Items like buffalo-cauliflower tacos ($12) — a play on a buffalo chicken wing adapted into taco form to make it street-food friendly — and the maple-glazed tempeh burrito ($11) have been popular from the get-go.

“I’ve found that friends of mine who aren’t plant-based can get intimidated by some of the vegan ingredients and foods,” Morgan said. “We really tried to make all of our ingredients and menu items things that would appeal to anybody.”

Morgan and Weith had started conceptualizing Conscious Eatz prior to the pandemic, and their planned business model has adapted well. “It’s mostly takeout, and now we’re set up with some of the delivery services,” Morgan said. “Everything’s pretty contactless, and it’s working out well for us.”

The mission of Conscious Eatz is to serve food that has a positive impact on the environment, animals and personal health, Morgan explained.

“If one person who typically eats meat decides for one of their meals, one day a week, to not eat meat, that in itself has a positive impact,” she said.

With that in mind, my dining companion and I skipped our usual omnivorous lunch plans over the weekend and placed an order for two sandwiches from Conscious Eatz: the chickpea tuna sandwich ($9) and the Lucerne club ($9), both of which came with an ample side of potato chips.

The “tuna” successfully mimics the classic sandwich. The combination of chickpeas and smooth hummus — spiked with celery, of course — has everything except the fishiness.

It would be a perfect polite solution to a tuna craving at the office, if sitting near coworkers for lunch al desko were something we could actually do.

The Lucerne club strays further from the original (no frilly toothpicks), but it’s a twist worth trying. The sandwich is piled high with shredded carrots, sprouts and crispy “carrot bacon,” and slathered with a Thai-inspired peanut sauce.

In a world of increasingly expensive sandwiches, these felt like a good deal at $9. We’d been tempted by the desserts — particularly the blueberry cheezecake ($5) — but skipped it to stay under our $12 per person limit. That ended up being for the best, as we were stuffed.

Conscious Eatz can typically be found on Clarke Street Wednesday through Sunday, barring special events that take the truck elsewhere. Check out the weekly schedule online and on social media.