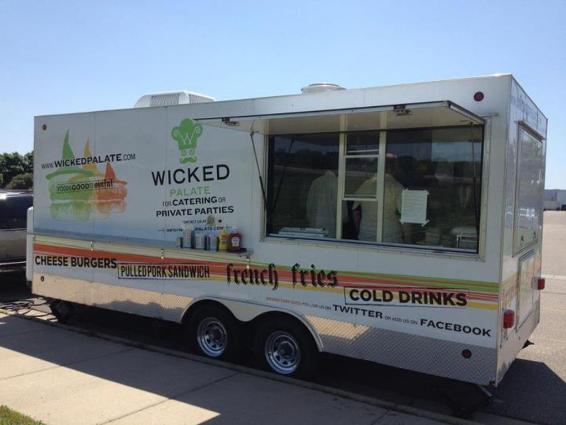 He launched his food truck, Wicked Palate, this summer, only to find that stopping to serve lunch on city streets ran afoul of parking regulations. Setting up on private property outside businesses required a special permit, as does selling food in local parks outside of special events.

“Suburbs are not friendly to food trucks,” Gustafson said.

He didn’t want to go elsewhere — the goal was always to roll around hungry Burnsville — so he asked his colleagues on the City Council to consider changing the rules.

In early June, the council lifted a requirement for a conditional use permit if a private business has invited a food truck into its parking lot. And the council indicated initial support for doing away with a 5,000-pound weight limit for a vehicle parked on a city street or right-of-way. Gustafson has recused himself from all votes and discussion on the issue.

But a new ordinance governing food trucks is still months away.

Mayor Elizabeth Kautz and other council members said they need more information before deciding what to do about the mobile food vendors: What have other cities done? How much should a permit cost? Will parking and traffic be a problem? Should there be a limit on the number of food trucks?

Council Member Dan Kealey said he’d like to hear from brick-and-mortar restaurants about what they think is fair in regulating the roving competition. And he said he’d like more information about what challenges food trucks face.

“It’s kind of hard to do that without getting a food truck vendor in to talk [to us] who’s not a council member,” he said.

While food trucks have proliferated in Minneapolis and St. Paul where there’s plenty of foot traffic at lunch time, they are difficult to spot in the suburbs. In addition to Gustafson’s Wicked Palate, there is another truck, Taco Cielo, that sometimes sets up shop on private property in Burnsville and Apple Valley. And trucks from the central cities make their way south for specific events such as Eagan Market Fest. “There’s a market here,” Gustafson said.

His initial business plan called for regular stops at Alimagnet Park around dinner time when fields were full of adult softball league players. Gustafson said the city attorney initially told him he could park the truck anywhere it was legal to park a car.

But when he applied for a permit, closer inspection of the rules revealed a 5,000-pound weight limit for vehicles parked on the city right-of-way. Gustafson estimates his food truck at 14,000 pounds.

Capt. Eric Gieseke of the Burnsville police said the ordinance wasn’t often enforced, partly because it would snare almost any commercial vehicle parked for awhile in a residential neighborhood, such as lawn care or cable companies making house calls.

But the fact that it was there was enough for Gustafson.

Most of his business now comes from lunch stops at businesses that invite him to set up in their parking lots. He is working to get the Wicked Palate invited to festivals and events in parks, which is legal under city laws.

City staff will gather information about related ordinances, covering parking, vending and food trucks to bring back to the council for discussion this fall or winter.

Gustafson is not running for re-election in November.

Asked whether his status as a council member was getting him special treatment, Gustafson said: “What do you think? They’re going to be talking about it five months from now when the season is over.”