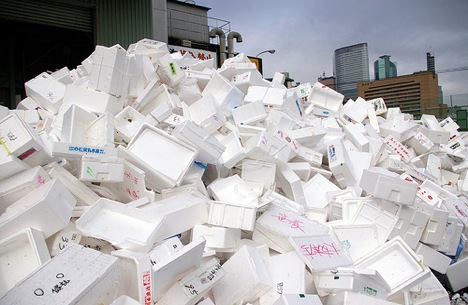 The Senate on Thursday narrowly approved a bill that would bar most restaurants, food trucks and school cafeterias from serving food in Styrofoam containers unless they can show 60 percent of them are being recycled.

The measure, passed 21-15, is backed by environmentalists concerned about what happens to the containers once they become trash. Styrofoam does not quickly decompose and often ends up polluting waterways, according to the Clean Water Coalition. Nearly 50 cities or counties have either enacted bans on their own or have barred the use of Styrofoam by their contractors.

Sen. Alan Lowenthal, D-Long Beach, amended his original ban in Senate Bill 568 to allow school districts, cities and counties to essentially opt out of the ban if they create a Styrofoam recycling program for local food vendors and there is “a reasonable
likelihood that at least 60 percent of the polystyrene foam food
containers generated annually…will be recycled by that
program.”

Senate Bill 568 was one of the bills recently labeled as a “job-killer” by the California Chamber of Commerce. It is also opposed by the American Chemistry Council.

If it becomes law, food vendors would have to turn to paper, plastic or biodegradable products. Under the bill, which now heads to the Assembly, the rules would take effect in 2014 for cities and counties and 2015 for school districts.

Republicans criticized the measure, saying it wouldn’t do much to curb the underlying problem of people’s tendency to litter. Among the Democrats voting against the bill was Sen. Michael Rubio of East Bakersfield. He said he had two major Styrofoam manufacturers in his district and couldn’t support the bill while the economy was down.