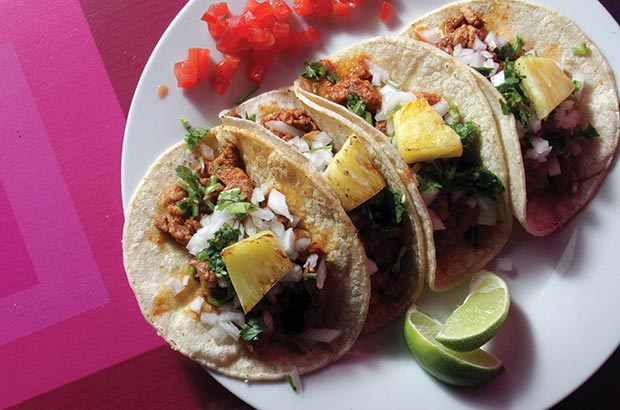 While a few of them are braving Calgary’s snow-packed streets, most of the city’s food trucks are parked for the winter. And for good reason; when Los Compadres, the taco-truck folks, were out in November, it was so cold their sopa tortilla froze.

Combine that tale of woe with the fact that Los Compadres has an outpost in Monterrey, Mexico, and it would be perfectly understandable had the food-truck operators headed south of a couple of borders till spring. Instead, they opened a restaurant.

Also called Los Compadres, the eatery is fun and informal, the decor reminiscent of a tent at an outdoor festival. Strands of bare bulbs hang across the ceiling, with walls painted an au courant, radiant orchid (Pantone’s 2014 Colour of the Year, though that’s probably a coincidence). The comfortable, multicoloured chairs are plastic, as are the dishes; the utensils and paper napkins sit on the table in tin pails painted bright green. There are two TVs going and Mexican pop tunes on the sound system.

We picked a seat under the caricature of Frida Kahlo painted on the window, and immediately were greeted by the friendly and attentive waitress (her lipstick matched the walls) who brought menus and complimentary homemade chips and salsa. My companion ordered a Dos Equis ($7) while I dithered between a Jarittos Mexican soda ($3.50) and the night’s special, a Jamaica water flavoured with hibiscus flowers and laced with mescal ($8). I eventually decided on the latter, which tasted like spiked fruit tea and went down far too easily. (I saw no worm in the bottom of my glass.)

Peckish, we started with frijoles refritos (refried pork beans, $3) and arroz rojo (traditional Mexican red rice, $5) while waiting for our entrees, which are all made fresh. I had the tacos de pescado ($15), marinated fresh tilapia, Baja-style. The fish and all the fixings (pineapple, tomato, lettuce and cilantro) are brought to the table on a plate, unassembled, along with a plastic steamer of tortillas; you construct the tacos to your liking. My friend had carnitas ($13), slow-roasted caramelized pork with onions, cilantro, salsa and lime. To both entrees you add salsas to your taste; we particularly liked the verde and roja salsas but there’s also guaca verde and chipotle. The smoky roja is so good, I wish you could buy jars of it to take home.

I eschewed dessert, opting, as usual, to have “just a bite” of whatever my friend was ordering. Our waitress urged him to try the churros con cajeta ($7), a twist of fried dough covered in cinnamon and sugar, that arrives at your table in a basket with a side of caramel dipping sauce. Crunchy on the outside, chewy on the inside, it was a sensual delight and worth every calorie.

We enjoyed our experience at Los Compadres so much, the following week we returned for lunch, particularly to try the pollo en mole. The silky mole (a complex sauce that includes chilis and, often, chocolate) was neither too hot nor too sweet, and I am not ashamed to admit I used a spoon to scrape every bit off my plate.

The origins of mole are unclear. (It’s like poutine that way.) One version credits it to nuns in Puebla who combined the few ingredients they had (including chocolate) to impress a visiting archbishop. Another has the chocolate falling into the sauce by accident.