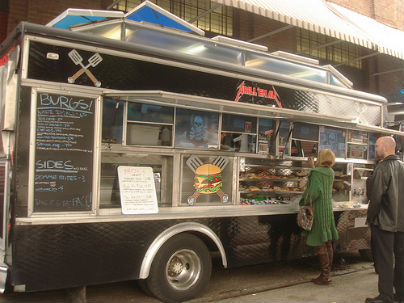 Earlier this year California assemblyman Bill Monning (D-Carmel) introduced a bill that would have barred every one of the state’s beloved food trucks from operating within 1,500 feet of a public school. The bill, the purpose of which was to reduce childhood obesity, pegged food trucks as yet another driver of the obesity epidemic.

Owing to the prevalence of public schools and the greater-than half-mile diameter restriction that such a ban would have imposed, food trucks would have become unwelcome throughout much of the state (as this map of San Francisco demonstrates).

Monning’s bill was quickly and widely panned. Reason contributor Kennedy referred to the bill as “an idiotic piece of nonsense.” From editorial pages to social media platforms, backlash against the bill was widespread.

Yet Monning did his best not to capitulate to public anger. First, he peeled back the proposed radius restriction from a preposterous 1,500 feet to a merely absurd 500 feet.

Then Monning published an op-ed, titled “Data Behind Limits on Mobile Food Vendors,” defending the facts that drove him to introduce the bill. But the op-ed was itself a stunning disclosure, given its almost complete lack of data. (Go ahead and try to find any data at all in the op-ed besides a claim that “50 percent of California’s children will have pre-diabetes or diabetes by 2025,” a claim Monning doesn’t tie to food trucks.)

After reading his op-ed, I wrote to Monning seeking actual data. None was forthcoming.

The only data I was able to obtain came courtesy of California Food Policy Advocates (CFPA), a nonprofit that sponsored the bill.

Tia Shimada, a nutrition policy advocate with CFPA. Shimada provided me with four sources she said CFPA relied on (and continues to do rely on) to support their restrictions on food trucks.

The article CFPA provided me that appears to be most relevant, “Street Vendors in Los Angeles: Promoting Healthy Eating in L.A. Communities,” was written in 2007 by two UCLA graduate students as part of a master of public policy project. Though not the sort of peer-reviewed research that should form the basis of any data-driven legislation, the authors’ research nevertheless notes—based on their own observations—“most [students purchasing from vendors] are accompanied by an adult.”

Another source of support CFPA sent me is a 2009 Los Angeles Unified School District internal audit report, “Board Motions to Promote Healthy Beverage Sales and Obesity Prevention,” that does little to bolster the case for A.B. 1678. The LAUSD report actually notes a comparable percentage of “unauthorized snack foods” sold by the schools themselves (34 percent of schools observed by auditors sold “unhealthy” foods) as by food trucks (43 percent). And the number sold in schools may be higher, depending on other data in the report. The report also includes among the “unauthorized and unhealthy foods” sold by food trucks these two: “corn on the cob” and “juices.”

As in the graduate students’ report, the LAUSD audit finds parents at the center of many food truck purchases. “[P]arents who were waiting for their children” were the first group of food truck consumers listed.

None of the materials CFPA provided me appear to support the notion that students are leaving school during lunchtime to purchase “unhealthy” food from mobile vendors. In fact, the CFPA reports—including a third that concludes food trucks contribute to “after-school snacking”—note only that vendors appear at schools before and after school.

This disconnect sounds familiar to Matt Geller, head of SoCalMFVA, a group that advocates on behalf of food trucks in the Los Angeles area (and co-author, with me and SoCalMFVA attorney Jeff Dermer, of a forthcoming law-journal article on mobile-food advocacy).

Geller, who was instrumental in leading the fight against Monning’s bill, was nonplussed by the lack of available data to support the bill. He pressed both CFPA and Monning for data. But he never received any.

“CFPA could not point to any schools where [mobile vending] was a problem,” says Geller. “I found that to be incredibly irresponsible of them to lobby for a bill that would demonize hard working entrepreneurs of the mobile food industry without any data to conclude that mobile vendors were such a huge statewide problem that a state bill was necessary.”

So why introduce the bill in the first place? Erin Glenn, head of Asociación de Loncheros, a group launched in 2008 to advocate on behalf of catering food truck owners in Los Angeles, blames “a general laziness on the part of the people pushing the bill to consider all of the impacts that this bill would have on the people of California.” Glenn and her also group advocated and lobbied against the bill.

Another advocacy group, SactoMoFo, led by Paul Somerhausen, also fought back against the A.B. 1678.

Rather than laziness, Somerhausen sees incompetence. “I honestly don’t think they knew what they were doing,” he tells me.

Faced with all this opposition, Monning recently pulled the floundering bill, admitting it “wasn’t ready for prime time.”

Just how unready? Monning pulled the bill before it “ever even made it to his own committee,” notes Somerhausen.

Consequently, what looked like a potential setback for food trucks in California instead turned into both a well-deserved victory for food truck advocates and a cautionary tale against basing legislation on data that appears sketchy or, in some cases, nonexistent.

Baylen J. Linnekin, a lawyer, is executive director of Keep Food Legal, a Washington, D.C. nonprofit that advocates in favor of culinary freedom.