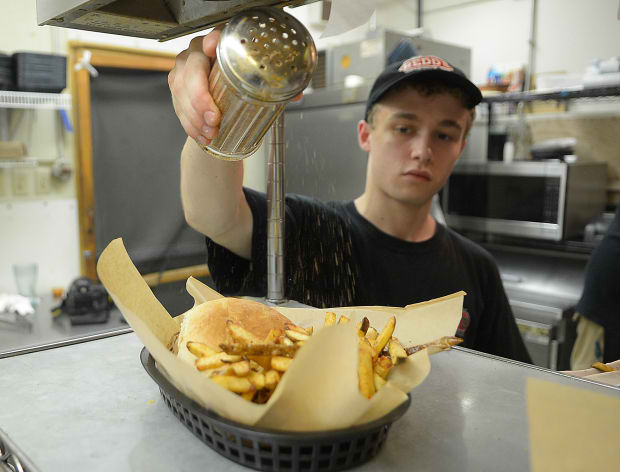 Food trucks are growing in popularity across the country, but the rolling restaurants aren’t welcome in Carlisle – yet.

Borough council is, however, considering a change in the ordinance banning food trucks from operating within borough limits. The change could bring emerging businesses out of the shadows.

For more than a year, Jason Turner has been working a loophole in the borough ordinance to build a following for his business, Unlawful Falafel. Turner sells falafels and lemonade from a customized bike, but only on private property such as downtown shops or Farmers on The Square, held at the First Presbyterian Church on the square.

“Right now, finding backyards and alleys make it sketchier than it is,” he said.

More have shown interest in operating within the borough limits. Councilman Tim Scott said in 2012 alone, the borough zoning officer turned down at least 10 different requests to sell food from a mobile unit.

Scott said the ordinance banning the trucks was written decades ago, but the nature of the business has changed with the introduction of high tech cooking and sanitary equipment.

Other council members were more circumspect about the possible change. Council President Perry Heath said he wasn’t in favor of adding a borough office to check on food vendors. He’s also wants to make sure pedestrian traffic is managed so sidewalks don’t become congested.

“I do have the initial mentality to protect the brick and mortar and the interest of future business downtown,” said Councilman Matthew Madden.

Allowing mobile food vendors also runs counter to the borough’s comprehensive plan which says they would discourage people from opening more restaurants that would be open longer hours and pay taxes.

“This is a fight that is in every jurisdiction that food trucks exist,” Turner said. “Restaurants and food trucks have to sit down and come to an agreement.”

Those in favor of food trucks say trucks could lead to permanent restaurants.

The trailer-first concept worked for Nick Maudlin, owner of Redd’s Smokehouse BBQ. For two years, he sold his barbecue from a trailer before moving into a bricks-and-mortar restaurant at 109 N. Hanover St.

The trailer involved minimal risk for a start-up and allowed Maudlin to build a customer base before opening the restaurant.

“Let’s face it. There’s a lot of restaurants in this town that fail because they don’t have the base,” Turner said.

Mauldin understands the skepticism, but said the business at a trailer is minimal compared to a permanent restaurant. The busiest day at the trailer was only about a quarter of what he now does.

Having seen the issue from both sides, Mauldin welcomes healthy competition that he said will spur restaurant owners to continue to improve.

“There’s enough room for all of us to play,” he said.