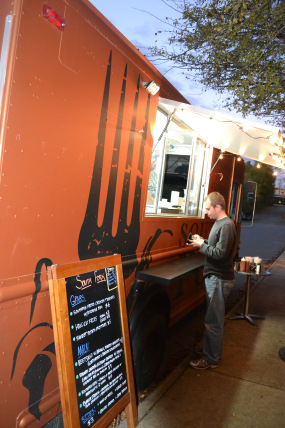 The best Southern cuisine is usually simple food eaten by hand, and some of Charlottesville’s newest food trucks are digging in and putting their own creative spin on popular regional fare.

One of these new trucks is South Fork, run by North Carolina native Phillip Gerringer, who moved to the area about seven years ago.

“I’ve been working in kitchens for about 14 years,” said Gerringer, who graduated from the University of Virginia in 2011 and began working on plans for his food truck shortly afterward.

Gerringer, 31, said he came up with the idea for South Fork while out searching for a “real job.”

Gerringer spent the next year and a half getting South Fork up and running.

Just days after a soft opening at James River Runners in Scottsville, Gerringer and his food truck hit the road on Labor Day weekend and set up at the Lockn’ Festival in Nelson County, which catered to thousands of hungry music lovers.

“I was really overwhelmed,” he said. “We had people coming back three times a day. It was wild.”

Gerringer said he thought the festival was a great way to showcase his food truck.

“What better way to do it then just go headfirst and get your ass kicked a little.” 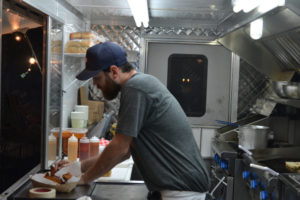 South Fork has also catered to thrifty shoppers at FleaVille and has a regular Thursday night gig atChampion Brewing Co., which will soon be followed by a late night stop on The Corner near UVA.

South Fork offers a variety of “grabs,” salads, entrees and sides with a unique twist.

“When people ask, I say we do Southern food. I try to do some different things with our menu, too,” Gerringer said.

While the mashed potatoes, collard greens, hush puppies, fried chicken and gourmet cheeseburger are popular food items, there is a clear favorite among South Fork’s customers.

“The meatloaf sandwich has really become kind of our signature dish,” Gerringer said.

He noted that he tries to mix in the different cultural influences that have contributed to Southern cuisine over the years, including African and French delicacies, when preparing his menu.

“It’s not like Southern cuisine is just from the South,” Gerringer said.

“The menu is going to always be constantly changing,” he added. “Just trying to keep it exciting.”

Another fork in the road

As South Fork stakes its claim in the Charlottesville mobile food scene, The Clean Fork has also stuck its culinary prongs into the region.

“It’s been a great experience so far,” said Marty Phipps, owner of the food truck and catering service. “People seem to be buzzing about the food and the service.” 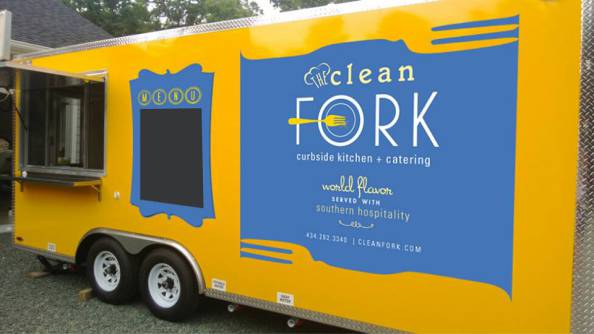 “We’re currently seeking opportunities with the University of Virginia,” he added, noting the business has also reached out to area vineyards that may want food service.

The Clean Fork sets up outside Champion Brewing on Friday nights and Three Notch’d Brewing Co. on Saturdays.

Phipps said the business actually started back in 2008 in Phoenix.

“We did what we could to stay afloat,” said the Virginia native, adding the sour economy and his father’s illness prompted him to move back to the Charlottesville area.

Jason Phipps, Marty’s brother, is the executive chef for The Clean Fork.

“He’s the guy that brings all the ideas together,” Marty Phipps said, adding the food is gourmet style.

The menu includes the signature barbecue sandwich known as “The Pig.” Marty Phipps said the pork chop sandwich and lettuce cups are some of the other popular menu items. “The sweet potato tater tots have been a big hit,” he said.

The Phipps pride their business on quality food and service.

“We’ve built a pretty good team for front and back of the house,” Marty Phipps said. “It’s not just out of the window, it’s to the table with the service we provide.”

For those looking for some traditional local food like mom or grandma used to make, Black Jack’s touts itself as a mobile soul food kitchen that offers breakfast, lunch and dinner.

The food trailer offers service Monday through Saturday and has often been spotted parked on Cherry Avenue.

While new to Charlottesville’s street scene, these vendors say they feel welcome and are celebrating continued growth.

“The competition is great and keeps everybody moving along, that’s for sure,” Marty Phipps said.  “I believe everybody can kind of coexist.”