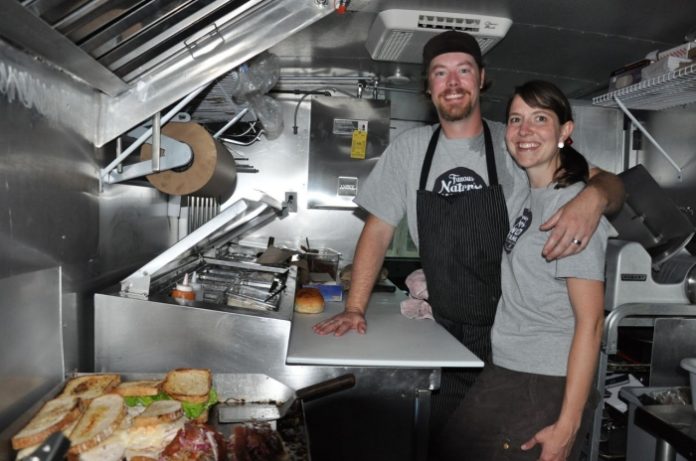 Another mobile food truck business is making its premiere in Chattanooga this summer.

A few months ago, Christian Siler opened Southern Burger out of a concerted Fed Ex truck.

The Flynts will make their debut with a grand opening at the Chattanooga Market Sunday, June 18th, and will begin opening daily for lunch starting Monday.

Flynt says her husband is an incredible chef who has worked in restaurants in Boston and Atlanta before relocating to Chattanooga three years ago to be the opening chef of Public House in Warehouse Row.

The two are now putting their own spin on what Flynt says is a new chef-driven “food truck” movement in the restaurant industry.

“Nationally, this is the next big thing in the industry. I think it is just fantastic. My husband is ready to do something on his own and it’s so cool that a truck is possible,” she said.

The new lunch truck business will feature a weekly changing menu with a focus on four fresh sandwiches and one salad every day.

‘We have so many more ideas than just four but it’s what can you execute in a truck, so we’ll just change the menu pretty often,” Flynt said.

She said they will make their Sunday debut with a quinoi salad with tomatoes and cucumbers. Everything comes with a truck-made pickled vegetable on the side.

“Our concept is slow food. We have no freezers, no microwave and no frier on the truck. We also have no satellite storage. This is the whole thing. All the food is fresh on the truck,” she said.

Chef Flynt slow roasts all the meats and makes all the sauces from scratch. His thousand  island dressing is made from scratch from his own recipes for mayonnaise and ketchup. To that he adds cucumbers that he has pickled himself. Local greens and breads are mainstays.

Consistent with the new trend, customers find out where the truck is parked each day by following them on on Twitter and Facebook, where daily updates are posted.

So far, Nater’s has permission to sell from their truck in the lot at the corner of Main and Cowart streets, where the Main Street farmer’s Market is held, as well as two blocks east in the lot across the street from Aleia restaurant, also on Main. There is one other downtown location that will be announced via social media. Flynt says once the Track 29 music venue opens behind the Choo Choo later this year, they will be a late night vendor there for patrons after the show.