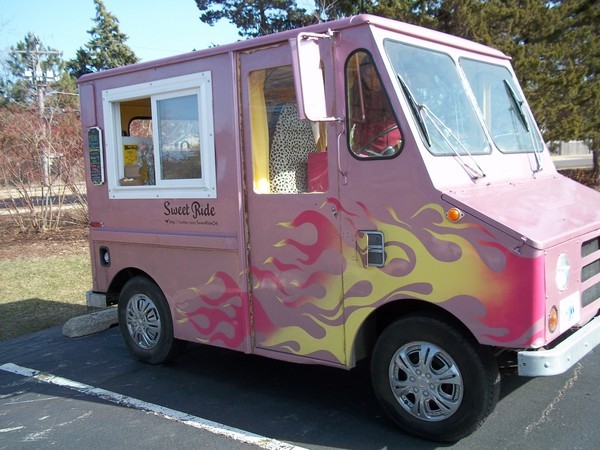 Quitting a stable job in today’s economy to run a bakery on wheels may not sound like a wise decision to some, but for Lupita Kuri it’s all about living life with no regrets.

On Saturday, Kuri rolled up to Northbrook in her new dream job: a food truck filled with sweets. In a hot-pink 1984 United States Postal Service truck painted with flames, Kuri served residents her latest treats while parked just outside the Metra station.

“I’m everywhere but I’m nowhere,” explained Kuri. This business venture and food truck is always on the prowl for new customers throughout the Chicago land. The food truck is Kuri’s office and she’s the head baker, driver and cashier for the Sweet Ride food truck that graced the streets of Northbrook on Saturday. Using Twitter and other social networking sites like Facebook, Kuri is able to keep patrons up to date on the dessert truck’s whereabouts.

But before Kuri can hit the road each day she must first bake the treats she’ll be selling, which means waking up extra early at 3 a.m. to start the day baking out of a rented commercial kitchen.

But Kuri will tell you it wasn’t her who had the lofty dreams of being a baker, it was her sibling. “My little sister is a pastry chef. She was the one with the Easy Bake Oven,” joked Kuri. Even so, the mother of two now finds herself manning a popular mobile bakery growing in demand.

Kuri says numerous people have offered to buy the venture from her already but she’s not selling…yet. Using her iPhone Kuri is able to update the @SweetRideChi Twitter account, Facebook and even rings up people’s orders with a new gadget that allows people to run their credit cards.

She’s now teaming up with Apple stores and will park outside various locations to attract customers to her dessert truck and hopefully the stores. Soon she’ll also be camping out in the parking lots of Crate and Barrel for the same kind of deal. But even more exciting is her chance to be on the Food Network’s Cupcake Wars. She’s not sure if she’ll be on it just yet but she’s progressing through the audition rounds.

“Even if it’s just cupcakes and sugar, it makes people happy,” said Kuri. So, when she goes to bed at night, it makes her day to think that she was able to sweeten someone’s day, and that she says makes it all worth while.