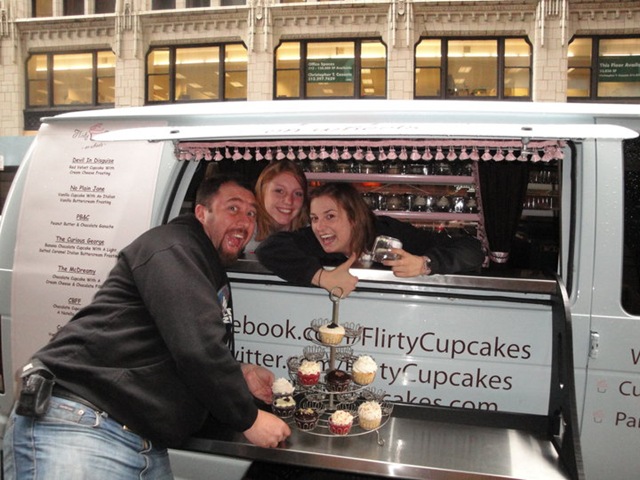 Whenever customers asked, Cleetus Friedman would say no way — he would not be starting a food truck. He recently had opened City Provisions deli in Ravenswood, he runs a popular supper club, and his catering business was strong: “I didn’t want to pull the focus away from the rest of what I do, and I didn’t want to just jump on a trend.”

It has been about a year since food trucks began rumbling across Chicago; Flirty Cupcakes was first out of the gate. It also has been about a year since the chefs behind those trucks started wondering when the city would approve an ordinance allowing them to cook inside their trucks, instead of forcing them to reheat dishes prepared hours ahead of time, which is standard practice at the moment.

A lot has happened. And very little: A food truck measure proposed last summer remains stalled in committee. But the scene is vibrant anyway, gathering heroes (Matt Maroni of Gaztro-Wagon), stars (Foss) and cult favorites (the Mexican-wrestler-mask-wearing guys behind Tamalli Space Charros). Nearly 20 trucks will be out by the end of summer.

And yet, mo’ trucks, mo’ problems.

“Some of the people starting trucks should not be starting trucks,” says Aaron Crumbaugh, a Chicago caterer who is launching Wagyu Wagon on July 1. “It’s like everyone who watched ‘The Great Food Truck Race’ and has some money in the bank or can get a loan wants to start one now, and they have no idea what they’re getting into.”

There’s also that handful of restaurant owners loudly grumbling that food trucks will pull away business. And without made-to-order food, even the best meals these wagons can offer feel like a B-list take on what the chefs could do. So, already trucks are going under: Simple Sandwiches, Happy Bodega.

“I couldn’t keep waiting for an ordinance,” says Amanda Cavazos, owner of Happy Bodega. “I’ve gotten a ton of email from people asking if I’m coming back, but the city has just taken all the fun out of it.”

Perhaps. But what’s available now is robust enough for us to offer here, a Chicago food truck census — with Twitter handles, so you can follow arrival places and times — and ratings on a scale of 1 (drive on) to 4 (don’t miss).