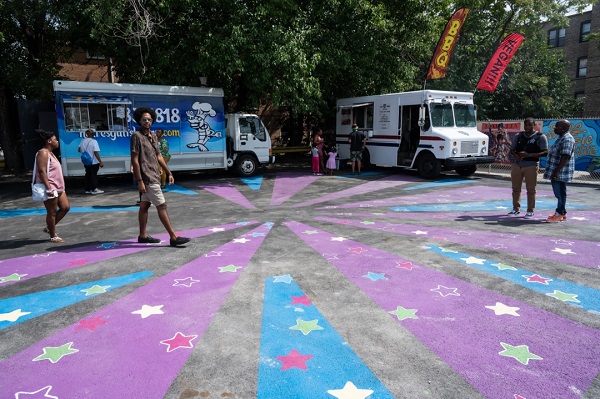 CHATHAM — Beginning Saturday, a South Side pop-up plaza will host family events all month long in hopes of welcoming more neighbors to the space dedicated to a musical giant.

The Greater Chatham Initiative will host Food Truck Saturdays 11:30 a.m.-2:30 p.m. every Saturday in October at the Mahalia Jackson Court, 1 E. 79th St. The event is free and open to the public. You can register here.

Neighbors can listen to live music as they explore food trucks from I-94 Ribs, TJ’s, Haire’s Gulf Shrimp and The Love Juice Co. Barbecue drizzled in sauce, tacos, shrimp baskets, burgers and more are all on the menu at the family-friendly pop-up event.

The Mahalia Jackson Court, a public plaza named after the civil rights activist and gospel singer, opened with a crowd in September. Jackson lived in Chatham, then a white neighborhood, in 1956 before moving to Hyde Park in 1970, where she later died.

The plaza is a joint venture between the Greater Chatham Initiative and Carter Temple CME Church, which owns the land. The South Side organization received $500,000 from the city’s Department of Planning and Development to build the plaza in April and a $10,000 grant from People’s Gas.

The 8,500-square-foot plaza includes a natural playscape for children, art curated by South Shore artist Dorian Sylvain and an exhibition housed in a shipping container honoring Jackson’s legacy in Chatham and beyond.

Phase two of the court, set to debut next year, will include a cafe and entertainment stage where artists can perform, said Nedra Sims Fears, executive director at the Greater Chatham Initiative.

The pop-up court will serve as a place for the community while the South Side church secures funding for Gateway 79, a mixed-use complex with housing and retail. In later years, the court will be disassembled to make way for the development, church leader Rev. Joseph Gorden said in September.

For now, Food Truck Saturdays is the first step in making the 79th Street corridor a one-stop shop for culinary delights and artistic development, Fears said.