Chicago’s food truck scene has been through enough twists and turns to fill a book ever since early pioneers like Matt Maroni and Phillip Foss galvanized it into a movement with Gaztro-Wagon and Meatyballs Mobile.

Neither Maroni nor Foss is in the food truck game anymore, but their combined effort still resonates in a slew of mobile restaurants slogging away daily, trying to do business in the face of one of the more restrictive food truck ordinances in the country. (Thank you, Tom Tunney and the Illinois Restaurant Association.) And not every food truck is worth the wheels on which they roll.

Following is a list of the food trucks we feel are the best in Chicago. These are the ones that, via their advocacy for the nascent industry and the quality of the food they produce, are the vanguard of the current local food truck scene.

Jay Sebastien and Carrie Clark took a gamble a couple years back that Chicagoans would embrace their takes on these Cornish-style hand pies that are popular among Michiganders and the bet has paid off in spades. Sebastien and Clark listen to their customers, always work to improve the quality of their pasties and recently converted their Bridgeport home into a storefront, with Clark quitting her job at Argonne National Laboratory to manage its operations. The “pastymobile,” a retrofitted GEM electric car, is a dwarf compared to other food trucks patrolling Chicago streets, but it’s easily the greenest of the lot —Chuck Sudo

In the morning, there’s nothing better than fresh, piping hot donuts. The only thing more satisfying than one big doughnut? A whole bunch of mini-doughnuts, to maximize the sugary topping-to-fluffy inside ratio. Enter Beaver Coffee and Donuts. For just $4, a half-dozen mini donuts can be in your tummy. Wash it down with some coffee and you’ve got not only breakfast, but bliss. If you can’t be bothered to follow the truck, head to their location in the French Market, where you might even be able to find a donut milkshake. — Anthony Todd 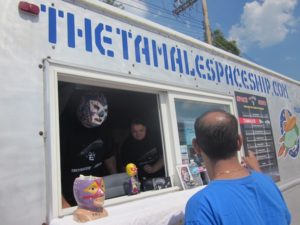 One of the longest-running food trucks in Chicago is also one of the strangest. Want a tamale served by a man in a crazy Mexican wrestling mask? The Tamale Spaceship is for you. Just thinking about their roasted pork tamale with pickled onions is making us hungry – luckily, unlike some trucks that constantly roam, the Spaceship lands at the same spots four days a week. They’ll even suggest wine pairings for your tamales, if you’re up for some day drinking. — Anthony Todd

I’ve said it a few times: Pleasanthouse Bakery is the best restaurant to open in the past couple years that isn’t attached to Grant Achatz and Nick Kokonas and the proof is in their Yorkshire-style pies, from the crust so buttery you wonder if it was run through a churner to the richness and freshness of the ingredients inside. (This omnivore insists the mushroom and kale pie is the one to order.) But Art Jackson and his crew also tool around town with a truck loaded with pies and other goodies if a trip to their Bridgeport and Three Oaks, Mich. shops isn’t in the cards. —Chuck Sudo

Wow Bao is one of my guilty pleasures that I cram down as often as I can. Maybe not so guilty, since my favorite flavor is whole wheat edamame, but it tastes so good it feels like junk food and I can never eat just two. Luckily, Wow Bao went mobile in 2011 and has been delighting diners all over Chicago ever since. The truck doesn’t always have the full menu, but I love it anyway. Bao are the perfect food truck food, since they are self-contained, not too messy and perfect even after an hour or two in a hot box. — Anthony Todd

Track the Wow Bao truck on Twitter by following the hashtag #bunsontherun.

“Chicago’s original gourmet taco truck” puts a pan-Latin twist on tacos with flavors like BBQ carnitas, Carne Molida (ground beef with plantains) and a vegetarian option teeming with fresh vegetables and mushrooms. Taquero Fusion is one of the busier food trucks on the streets and their Twitter feed frequently updates with new locations. —Chuck Sudo