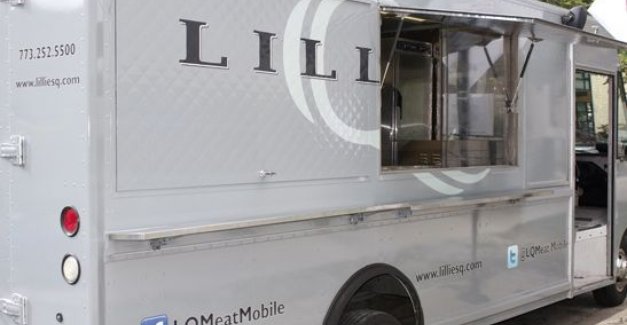 A new era of Chicago food trucks has dawned, yielding more than tamales, frozen yogurt and fancy cupcakes. Just when it seemed like every niche was taken, out pops a meatloaf wagon, a schnitzel mobile, and a cookie truck built around macarons, macarons, and more macarons. Check out Chicago’s newest food trucks that will hit the streets this month.

Bridgeport Pasty
For meat pie fans, Bridgeport Pasty is now rolling. The pasty (pass-tee), a style of meat pie that originated in Cornwall, England, was an idea that came to Chicago after owners Jay Sebastian and Carrie Clark stopped at a pasty kiosk while in London a few years ago. The Bridgeport Pasty is unique in that it is sold out of a state-of-the-art, all-electric GEM car that has a recirculated heating system built in to keep the meat pies warm while they travel. Bridgeport Pasty made its debut with three different flavors to choose from: a traditional Cornish pasty called the “Yooper,” a chicken pot pie, and a veggie pasty. Follow Bridgeport Pasty on Twitter or Facebook for route information.

Lillie’s Q Meat Mobile
The mobile version of the Chicago-based Texas barbeque joint, Lillie’s Q had its first run at the Time Out Chicago Food Truck Social, where the meat wagon sold more than 1,200 $10 pulled-pork sandwiches on brioche. Though Chef Charlie McKenna’s 24-foot long meat mobile hasn’t officially pulled out for business, according to Twitter, the truck had been sighted at Paulina and Cortland. Track Lillie’s Q Meat Mobile on Twitter and Facebook.

Sweet Spot Macaron Truck
Sweet Spot has billed itself as the first all-macaron mobile truck in the world. Pastry chef Galit Greenfield, the mastermind behind this endeavor, is reportedly working hard, perfecting macaron flavors like chocolate espresso, hazelnut, strawberry, passion fruit, and pistachio. Greenfiled plans on selling her French marcarons for $1.50 per cookie. Follow Sweet Spot on Twitter or Facebook for more info on the launch.

Meatloaf a Go Go
When Meatloaf Bakery opened its doors in late 2008, Cynthia Kallile showed Chicago that she could make meatloaf intriguing with her various meats, mix-ups, and fun techniques of loafing. While some meatloaves are pretty typical, Kallile takes it a step further. For instance, the signature “Mother Loaf” meatloaf uses beef, pork, and veal. “The Omega 3 Loaf” uses Alaskan salmon. This month, Kallile plans to roll out a meatloaf truck called Meatloaf a Go Go. Her mobile meatloaf to go menu will likely include Meatloaf Bakery favorites, as well as the restaurant’s famous cookies, whoopie pies, and brownies. Follow Meatloaf a Go Go on Twitter and Facebook for more info.

Chicago Schnitzel King
What exactly is a schnitzel? According to self-proclaimed Schnitzel King Greg Burke, the owner of the soon-to-launch Chicago Schnitzel King schnitzel truck, it’s “basically a fried cutlet of meat. There are various kinds, but pork is most common.” Burke, a Chicago native, was raised in the Western suburbs and is a Marquette University Alum. Burke’s schnitzel truck menu items will all be priced under $10 and will include The King’s Weiner Schnitzel Sandwich (Veal cutlets with sauteed onions and peppers on fresh Turano bread), the Chicago Schnitzel (same as above—but with pork), and for vegetarians there are the Skinny Schnitzel (which uses sweet potato) and Grandma’s Schnitzel (“The Queen’s” potato salad). Desserts include sheet cake, kolaczki, and Banana Heaven Bars. Follow Chicago Schnitzel King on Facebook and Twitter for more info.

Traffic Jam Food Truck
In August, Jam restaurant owner, Anthony Fiore announced that he would launch a food truck, appropriately named Traffic Jam. The truck, a converted Meals on Wheels truck, according to Eater, plans to launch as soon as it can get licensing. Fiore is planning on launching Traffic Jam food truck with the opening of the new Jam location in Logan Square. The menu for truck will include sandwiches from Jam and falafel sandwiches from another of Fiore’s endeavors, Chickpea. In addition to sandwiches and falafel, Traffic Jam will also likely sell a variety of artesian popsicles such as its famous watermelon and jalapeno ice pop—and others similar to the icy treats Fiore offered at Lollapalooza’s Chow Town. Follow Jam on Twitter or Facebook for up the the moment “Traffic” reports.

Zullo’s Food Truck
Zullo’s Food Truck, also launching this month, aims to offer fresh, authentic Italian food with local and organic ingredients from old, time-tested family recipes. For years, Zullo’s owner, Adriana Marzullo, has been a regular vendor at Green City Market, as well as a variety of other markets around the country. Taking her love to the food truck scene, Zullo’s will offer about 20 varieties of calzones, including mini dessert versions, priced between $7 and $9. For those who don’t want to wait, catch Marzullo’s calzones at Green City Market in the meantime. Recommended flavors include the seasonal fruit calzones and the chicken pot pie. Catch Marzullo and her partner Paul Eberly around town by following them on Twitter and Facebook.