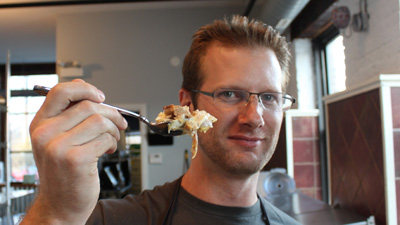 Hanging on the wall in the Ballcave – Phillip Foss’ name for the kitchen just off of Western Ave. that houses his Meatyballs sandwich operation –  is an odd slip of paper for a guy running food trucks.

Fine dining veteran Foss will begin serving a limited chef’s menu to invitees in a space he’s naming “El” in June. “Just don’t call it an underground restaurant,” he said. “It’s very much above the ground.”

The space is tight. Depending on how it’s configured it might fit 15-20 people. After soft launching, it will open to the public for reservations a limited number of nights during the week and potentially for a Sunday brunch. He described it as “small, exclusive and probably BYOB.”

After “El” opens, he and his crew will pull double duty. They’ll do meatballs by day and more refined dishes by night, including wife Kenni’s couscous and pastries.

The Le Cirque alum launched his Meatyballs concept a few weeks after leaving Lockwood in the Palmer House Hotel last August. After making it though the winter (which saw the demise of the Simple Sandwich and Happy Bodega trucks), Foss launched a second and third truck in early spring and has thrived, selling a couple of hundred of his meatball subs and sliders every day.