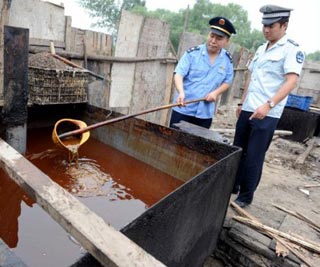 Chinese police have arrested 32 people in a nationwide crackdown on “gutter oil”, or old kitchen oil that has been illegally recycled, authorities said yesterday.

The campaign is part of an effort to clean up China’s food safety record after several embarrassing scandals, including poisoned formula milk and tainted pork.

Police seized 100 tons of the recycled oil in 14 provinces and closed six workshops, the Ministry of Public Security said. The oil can contain carcinogens and traces of aflatoxin, a potentially deadly mould.

In recent years Chinese consumers have been hit by a series of food safety scandals, including fish treated with cancer-causing antimicrobials. Milk and infant formula laced with the industrial chemical melamine killed six children and sickened 300,000 in 2008.

The government responded in 2009 by enacting a tough food safety law that promised harsh penalties for makers of tainted products.