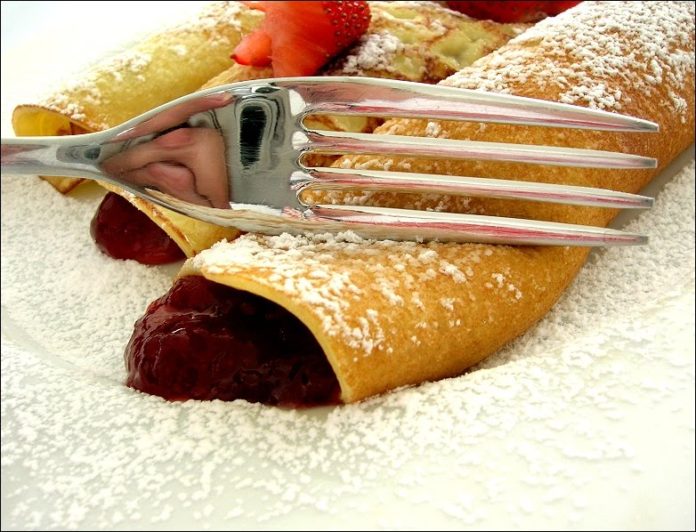 So you know about food trucks, right? Lots of them park downtown and circle the city and go to bars at night and have generally added a fun note to the dining scene around here. Mostly they’re big delivery truck kind of things.This summer, look for some new transportation models in mobile food.

You’ll be able to buy quesadillas from an Air Stream trailer, and crepes from a mini-trailer pulled by a Mini Cooper.

The first is Turophilia, which means “love of cheese.” It’s the brain child of Fallon Horstmeyer, who graduated from UC with a degree in Anthropology recently. She’s been working on  her 1967 Airstream trailer for at least a year,  getting it into beautiful, shiny  shape.  She said she’s polished it until you can see yourself in it.  She will be out selling quesadillaas of all kinds in the next week or two.  She’s using about 15 kinds of cheeses in her creative quesadilla creations.  Many are musically inspired like the “Jack White” and “The Black Keys.” There’s a grilled mac and cheese quesadilla, a goat cheese vegetarian version, and  “The Bobby Woo” which is  sushi -inspired, with rice, shrimp, avocado, wasabi, etc. She’s all licensed, just waiting for the logo on her trailer. She has a deal with Central Parking for a spot at 8th and Vine, where she’ll probably be most of the time, and she plans to go to the City Flea market on Central Parkway, as well.

Then there’s Cooper’s Crepes. This is Peter Barton, a native of Ireland, who will pull a tear-drop trailer, just big enough for two crepe griddles behind his black Mini Cooper.  You’ll find him at the Deerfield Farmers Market, on Saturday mornings at Kingswood Park, 4188 Erwin Simpson Road. He won’t be there this Saturday, and I don’t think it’s guaranteed he’ll be there the next one either–he still needs at least one kind of permit.

He’ll also do private parties and so on. For now, it’s just sweet crepes. That’s the kind of thing that gets you up and out the door to the farmers market on Saturday morning.

I wish I could show you photos, but they aren’t camera-ready yet.  When they are, I’ll be sure to get some  and post.