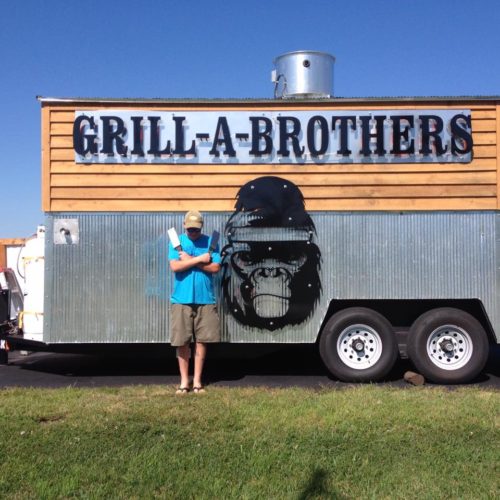 Foodies, prepare yourselves: Columbia streets are about to get more delicious.

Grill-A-Brothers, which serves mostly hot sandwiches, is the newest addition to Columbia’s food truck population. It’s joining the ranks of Ozark Mountain Biscuit Co., Pepe’s of Columbia and Playing with Fire Pizza, among others.

Grill-A-Brothers serves up traditional sandwiches, including a Cuban (snidely called the “Tony Montana”) and meatball sub called, “Where Do You Get the Balls?” But the Grill-A-Brothers have also made some more unexpected additions to the menu  such as the General Tso and Tsos sandwich, made with General Tso chicken, steamed broccoli and vegetable tempura, and the Baby Back Burger.

The “brothers,” Patrick Dierkes and Daniel Thorne, built their truck themselves with equipment scavenged from closed restaurants, including Macaroni Grill. Dierkes said he worked in brick-and-mortar restaurants before but liked the freedom of owning his own business and being able to get his restaurant to customers instead of the other way around.

To make the Baby Back Burger, the chefs smoke pork spareribs for six hours, then pull the meat off the bone and form it into patties. The patties are then seared and smothered with broccoli slaw.

“It’s pretty labor intensive, but it’s worth it,” Dierkes said.