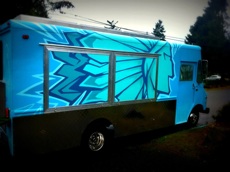 We took a new Native American food truck for a spin earlier this week: Off The Rez‘s eclectic local owners run their converted linen truck as a way to connect with family traditions. Commenter Purr Gurrl didn’t think they were so special, though, yet we think she deserves Comment of the Day for her unwavering faith in truthiness and the priority of personal experience over facts. Her food-truck frequency critique is our Comment of the Day:

I’m all over downtown and Seattle north of downtown to the Snohomish line daily, and the only food trucks I’ve ever seen are a couple of unheralded by Seattle Weekly taco trucks parked in non-descript locations. I think the food truck phenomenon is mostly just empty hype following the Foot Network food truck spin for this season. Imitation is the sincerest form of flattery or a lack of imagination.