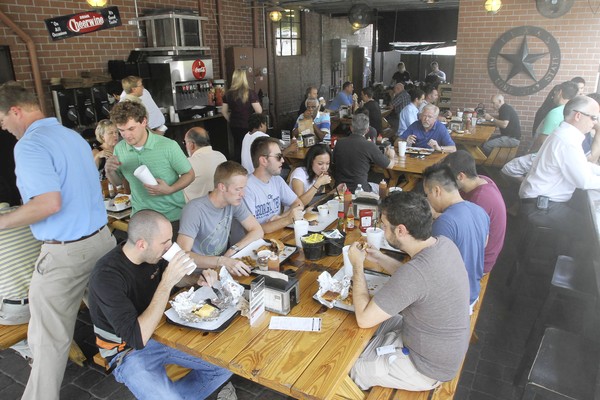 The humble barbecue joint has for years been a staple in Central Florida, but some newer places are heating up the competition and prompting some old-timers to retool their strategies.

The popular 4 Rivers Smokehouse will open a third restaurant in Longwood, and it may build a fourth in east Orlando. Dickey’s Barbecue Pit, a Texas-based fast-casual chain, is expanding here. Some new independents — including barbecue food trucks — have also started up and gained a following.

Inexpensive comfort food, barbecue can attract customers even during tough economic times, analysts say. And in Central Florida, consumers who come from all over have less loyalty to a particular regional flavor, so they’ll try all kinds — from Texas-style brisket to pulled pork sandwiches that are a Memphis specialty.

Central Florida is home to many independents and chains, from small ones such as Keller’s and Bubbalou’s to Sonny’s Real Pit Bar-B-Q, with 129 restaurants in nine Southeastern states.

“I enjoy being in a market that does have a high amount of competition,” said John Rivers, who opened the first 4 Rivers in Winter Park a year and a half ago.

Since then, crowds have lined up outside the door to sample 4 Rivers’ signature beef brisket, eaten at picnic tables outside. A second 4 Rivers recently opened inWinter Garden.

Before she discovered 4 Rivers, barbecue “was just kind of there,” said Crystal Hutcheson, 27, of Orlando. Now, she visits about once a month. “I think the meat is delicious but also they really focus on the sides,” said Hutcheson, a staff member at Florida Christian College. “I also love the atmosphere. It’s the way barbecue places should be.”

Rivers has considered a fourth restaurant either near UCF or around Waterford Lakes but would likely not build any more than that in Central Florida. “You don’t want to overcommodify a product,” Rivers said. He does, however, want to build 4 Rivers restaurants in other parts of Florida — and the country.

Taking a barbecue chain nationwide can be difficult, as Orlando-based Darden Restaurants discovered with Smokey Bones. The chain floundered before Darden sold it to a private firm that steered the focus away from barbecue.

In many parts of the country, people preferred barbecue restaurants that catered to specific regional tastes. Another problem was that “they were a little more upscale, serving a downscale product,” said Chris Muller, a former University of Central Florida restaurant professor who’s now dean of Boston College’s School of Hospitality Administration.

The more casual, quick-serve Dickey’s Barbecue Pit began growing outside its home state of Texas seven years ago and now has restaurants around the country. It expects to grow from 150 to 200 by the end of this year — part of a nationwide expansion that will include opening in Winter Park and near International Drive. It has already opened in Oviedo.

Phillips said Dickey’s has a low-cost business model that includes using secondhand equipment and retrofitting old restaurants instead of building from scratch.

Some folks are going even further, starting restaurants out of trucks.

Faced with an old building and a faltering economy, Henry Jones closed his Uncle Jones’ Bar-B-Que in Altamonte Springs about a year and a half ago. “A lot of customers asked me to open the restaurant back up,” said Jones, 68. “I’m an old man, so I don’t want the headaches.” So Jones now sells the barbecue out of a truck. Another food truck called Red Eye BBQ opened this year too.

It’s not just barbecue restaurants that are new competition for the established players. Many chains with broader appeal offer items such as baby-back ribs.

“At one time, if you were barbecue, who else did it?” said Bob Yarmuth, chief executive officer of Maitland-based Sonny’s.

While the chain remains a regional favorite, Sonny’s has had its challenges.

Yarmuth said Sonny’s — which started in the late ’60s — is “a baby-boomer driven chain” that needs to figure out how to “remain relevant in changing times.”

Sonny’s has closed several of its restaurants. Some were “ridiculously old,” Yarmuth said, while others were in poor locations.

The company is trying to attract new, younger customers with its remodeling that includes adding large bars, patios, flat-screen TVs and new lighting. It is using social-media sites including foursquare. And Sonny’s is testing some improvements to food — in particular, the baby back ribs and pulled pork, which Yarmuth sees as crucial in this market. “You’ve just got to keep plugging and improving,” he said.

Meanwhile, O’Boys Bar-B-Q closed its restaurants in Winter Park and on West Colonial Drive. Co-owner and president Chris Granville opened a new, much smaller O’Boys — this one in Casselberry, which is “not overrun with barbecue yet.”

Granville is spending much more time in the kitchen to try to revitalize his remaining restaurants, which include two in Orlando, and lure back lapsed customers.

“Whether it’s because we’re the old guy, their allegiance is elsewhere,” he said. “I’ve looked at it like I’m starting over again.”