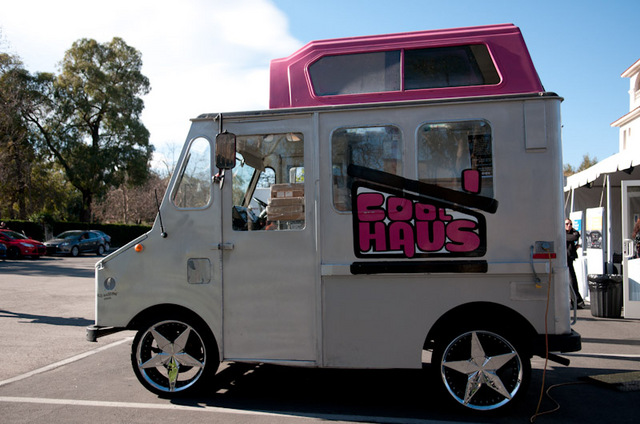 Terence Trouioot reached out from the little window of the hot pink Coolhaus truck and handed me a big scoop of bacon ice cream wedged between two artfully placed chocolate chip cookies.
If you use your imagination it could almost look like a chunk of the Guggenheim, but, you know, tastier. I don’t know if Frank Gehry eats ice cream sandwiches, but if he does, he’d appreciate these.
“What’s his name from Mad Men . . . Don Draper? Jon Hamm, yeah, he got the bacon ice cream,” Trouioot says in his super laid back accent. “Philip Seymour Hoffman was here – he got bacon ice cream. That funny guy on SNL, Andy Samberg, he got the bacon as well. He was really stoked about it actually. He told me specifically that ice cream sandwiches were his favourite thing in the world, but I don’t know if he was being facetious or not.”
Gourmet food trucks are slowly edging in on a business once dominated by greasy fry vans. Here in Canada, Vancouver’s Japa Dog stands are already famous for combining the humble hotdog with fine Japanese cuisine.

In Japan, the tiny Motoyoa Express vans are bringing world-class espresso drinks to the streets. But L.A. is still the capitol of the classy food truck. Coolhaus is one of the most well known, but there’s also the Grilled Cheese Truck, Bollywood Bites, The Gastrobus, Sprinkles Cupcake Van and the original Kogi BBQ. If you’re ever in town, Twitter is the best, and sometimes only way, of tracking them down. (Check out this gallery of our favourite gourmet food trucks.)

Trouioot – pronounced a bit like “trio” with a “t” on the end – must have spent too much time in L.A. The New York native is totally relaxed and cool inside what must be the world’s smallest ice cream truck.
“It’s a 1985 AM General, an old postal truck. So you’ll notice the wheel is on the right side and there’s no power steering. It’s kinda crazy,” he said with his head half poking out the window.
Imagineering
Architect Natasha Case bought the old truck off Craigslist with her friend and business partner Freya Estreller about two years ago.

Case, who used to make these architecturally inspired ice cream sandwiches for her co-workers, had just been laid off from her job as a Walt Disney Imagineer. Estreller thought the sandwiches were good enough to sell and so the two fixed up the truck and headed to the huge Coachella music festival outside Palm Springs.

“It’s been super successful,” Trouioot says. “I joined about a year after Coachella and that’s when it sorta blew up. They got their second truck and they brought me in and it kinda just developed into a bigger business. Now our staff varies between 15-20 depending on the season.”
Coolhaus just bought their third truck in November. They’ve already got a truck in Austin, Texas and they should have two trucks rolling around New York and the Hamptons this summer.
Canada? No plans yet, but Trouioot says if they do well in New York then it’s only a matter of time before Coolhaus is everywhere.
The OG
The original AM General postal truck is still making the rounds though. “It’s the OG,” Trouioot says (‘Original Gangster’ for all you over 30s.). “I’ve been through hell with this truck.

“It was scary at first when I started out, but I’m pretty used to it now. It’s actually pretty fun to drive. They pimped it out with these star rims which are pretty nice. Although, the tires and too small for them which is kinda ridiculous.”

“During the summer it gets really, really hot and it overheats quite easily. I had to take it to a gas station to get like pounds of ice just to cool it down just so I could get to the next destination safely.”
The secret to the success of Coolhaus and the other gourmet trucks is simply good food. Don’t think that in the fridge of Trouioot’s truck you’ll just find a few of Baskin-Robbins’ 31 flavours.

No, this is the gourmet stuff. “For the longest time my favourite was the chocolate chip cookie with the bacon ice cream but now we have this new flavour: Nutella with toasted almond.

But we also have crazy other flavours that I like, like strawberry and jalapeño. We have this spicy chocolate that’s with chipotle peppers which is really good too.”

The ice cream sandwich is quickly melting in my hands under the hot Californian sun. The edible wrapper can’t contain the drips. The bacon ice cream tastes salty at first, but then that saltiness somehow gives way to real, honest bacon flavour. The chocolate chip cookies are soft and soak up some of the ice cream.

It’s very strange. Better try more. After a few bites, there’s no doubt about it, this is delicious.