Selling: Mexican cuisine with pork, beef and chicken. Hand-made tortillas and salsa can be sold individually.

Around the street corners of Corsicana, multiple trucks can be found serving lunch – and sometimes dinner – for those looking for a quick bite to eat. The more well-known trucks serve seafood, barbecue, and Mexican cuisines. One of the more popular food trucks so far is the Taco Station located at the corner of Seventh Ave. and S. 12th St., close to the Tiger Tote gas station.

Yebel Shlimovitch is the owner of Taco Station, and he runs his business with his wife, Tania Gonzales, and his mother, Yolanda Medrano. Shlimovitch first started in the food industry in 1996 when he worked at Frontera Grill and Topolobampo, under famous chef Rick Bayless in Chicago. When visiting his family in Corsicana, he would often do a lot of cooking for them. And when he eventually moved into town, he wanted to start his own business.

“In my mind, I was like ‘I need to open a restaurant’,” Shlimovitch said. “But it was hard to find the right place at the beginning. So my wife and I were thinking about what to do next, when we noticed the popular food trucks all around town. So we contacted companies and found a truck in Houston.”

They were able to acquire a loan for the vehicle and had it customized so they could legally run a business with the truck. Shlimovitch was able to collect his starting license and permits thanks to Leslie Leerskov of the Small Business Development Center at Navarro College.

Once its truck was ready, Taco Station began to serve customers in front of Seventh Avenue. They serve tacos, quesadillas, gorditas and burritos, and use either beef, chicken, or their popular cochinita pibil pork.

“The cochinita pibil is a slow-cooked pork wrapped with banana leaves,” Shlimovitch said. “It takes a while to prepare, about an hour, but it’s very tasty and is actually a famous dish in Mexico.”

Another unique experience with the Taco Station is that Shlimovitch uses only the freshest authentic ingredients right down to the tortillas; his mother, wife and him make the tortillas by hand as soon as they’re ordered. Shlimovitch says that is how it used to be in Mexico, when the tortillas were served by women who hand-made the bread. Taco Station also serves its own salsa, and both the salsa and tortillas can be sold individually for those wanting to take them home.

Shlimovitch crafts his menu by making dishes and inviting friends home to taste his meals to see what they like. He also passes meals to his neighbors at the tire shop and the gas station.

“I want to be able to change the menu every other month,” he said. “This way people will not get tired of coming and eating the same things with us. People like to try something new.”

Because Taco Station operates via truck, it’s available to be rented out to arrive at private events and parties, as the truck can either park in the street in front of someone’s home or near a local park or other location for events.

Shlimovitch is very thankful to Corsicana for giving him the opportunity to have a thriving business in the town, and he shows his thanks by taking one Sunday out of the month by giving free food to those without at churches.

“I promised myself once a month I will give food away and give back to the community that helped me get my start,” Shlimovitch said. “I was taught that to receive something, we must first give. And it might not be me who receives back, it could be someone close to me instead that benefits, but I will still be happy.”

He still plans on opening an established restaurant here in Corsicana and eventually use his truck for catering. Based on his current success, Shlimovitch predicts that it will be two years down the road before then. Until that day comes, he’s happy to serve Corsicana authentic Mexican cuisine from his truck. 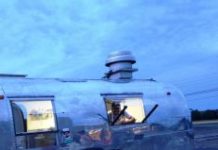 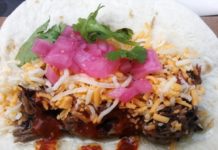 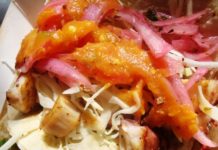