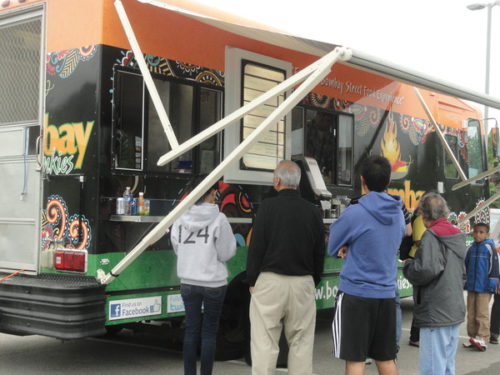 Food trucks came up in discussion during Monday’s city council meeting and Thursday’s meeting of the Economic Development Commission. EDC member Glenn Wilen wondered if there was a way to limit them to areas possibly near office parks, or to limit operators to offshoots of existing brick and mortar businesses. The latter sentiment was suggested Monday by Imo’s owner Steve Noles at City Council, given the amount of investment those brick and mortar businesses have made in meeting other city regulations.

City officials have noted in the past that areas surrounding the Donald Danforth Plant Science Centerhave expressed a sense of isolation when it comes to the availability of restaurants. In fact, a food truck catered the opening of the nearby Helix Center last year.

Community Development Director Paul Langdon said the concern for having the trucks on a site like the Danforth campus could be just as much a worry for the operators as anyone else. While the trucks use social media to create an initial buzz, he said there’s a question as to whether there’s enough business there to sustain a full hour of operation.

Part of the city’s motivation in investigating the issue stems from the fact that Creve Coeur’s Parks department has expressed interest in having trucks draw crowds to city facilities. Similar efforts in neighboring Chesterfield and in the city of St. Louis at Tower Grove Park have attracted attention.

Advocates and opponents have their own anectdotal evidence to suggest the trucks could have some impact on brick and mortar businesses or no impact at all, City Administrator Mark Perkins said the next step would be to survey the business community and the chamber of commerce for more feedback.

While at least some corners of the EDC and the Planning and Zoning Commission have wondered aloud if a provisional ordinance could be established to test out the process on a temporary basis, no such interest has yet emerged during the course of discussion at the city council level.