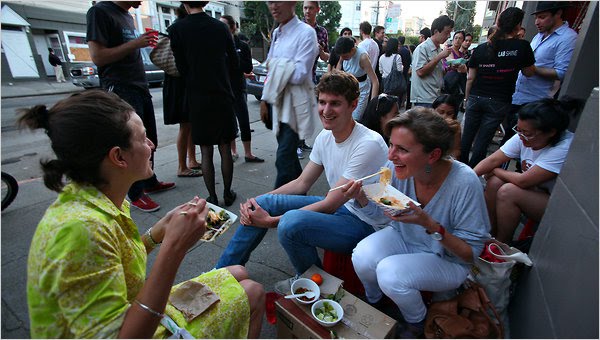 Keep Food Legal (KFL) is “the first and only nationwide membership organization devoted to culinary freedom,” here are some of the organization’s principles from its mission statement:

“We support the right of every American to grow, raise, produce, buy, sell, cook, and eat the foods of their own choosing. KFL’s mission is to promote goodwill, fellowship, and a sense of common purpose among those who grow, raise, cook, and sell food—and those who buy and eat it.

KFL will work to defeat food regulations and bans which limit our freedom to produce, cook, buy, and sell the foods we want. The government has no right to tell people what we can and can’t eat.

KFL will advocate at the federal, state, and local levels in favor of more food choices. It is not enough to oppose bad new laws. We will work—in legislatures and in the courts—to roll back bad ones already on the books.”

Here’s one example of the type of culinary freedom that KFL would probably support: the “underground night food raves” in San Francisco (pictured above), featured in the NY Times article “They Gather Secretly at Night, and Then They (Shhh!) Eat“:

At this quasi-clandestine monthly event, a tribal gathering of young chefs, vendors and their iron-stomached followers are remaking the traditional farmers market as an indie food rave. In a sense it is civil disobedience on a paper plate.

The underground market seeks to encourage food entrepreneurship by helping young vendors avoid roughly $1,000 a year in fees — including those for health permits and liability insurance — required by legitimate farmers markets. Here, where the food rave — call it a crave — was born, the market organizers sidestep city health inspections by operating as a private club, requiring that participants become “members” (free) and sign a disclaimer noting that food might not be prepared in a space that has been inspected.

Some see the growth of the underground markets as part of a high renaissance of awareness for a Fast Food Nation generation, with its antipathy for the industrial food machine. In the recesses of the markets, a certain self-expressive, do-it-yourself “craftness” flourishes.

Amateur cooks around the country are pushing to have the right to sell unlicensed goods directly to consumers. So-called “cottage food” laws that allow products considered nonhazardous, like pies and cookies, exist in 18 states, with five more considering similar legislation.”