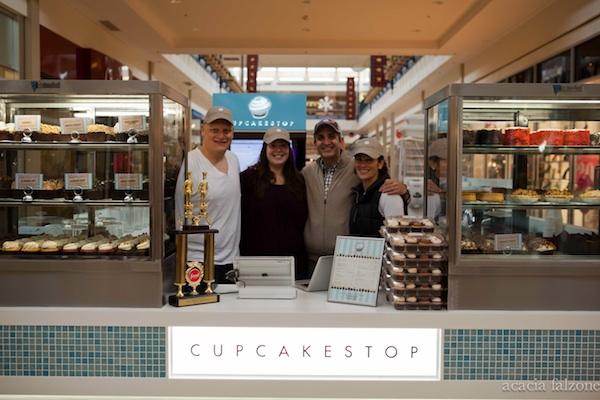 National Cupcake Day is this week (Dec. 15), but for Richard Kallman, every day is cupcake day. AS CEO of the cupcake retailers, CupcakeStop, all it took was one bit for him decide to get involved with the company.

Today, Kallman has gone from initial investor to CEO and in the process has helped the company grow. It initially had a food truck based in New York City and now has an additional truck and two retail locations, with three more locations set to open next year. CupcakeStop  offers 54 flavors and varieties of cupcakes ranging from red velvet to Boston cream and French toast to Mexican chocolate.

CupcakeStop, however, was not the first stop in Kallman’s business career. For the past 25 years, Kallman has worked at Bookazine, a family-run book distributor, started by his grandfather and great-uncle in 1929. Today, Kallman serves as Bookazine’s chief operating officer.

“We are the third-largest book distributor in the country,” Kallman said. “We are the middle man between the retailer and the publisher.  We are an international operation that distributes books to retailers, brick-and-mortar shops, libraries and independent bookstores.”

Despite having extensive experience in the book distribution industry, it was a bit of luck that brought Kallman to CupcakeStop.

“Lev Ekster, the founder of CupcakeStop, was actually my dad’s neighbor’s son,” Kallman said. “He started the company in the summer of 2009. I got involved soon after its opening as a co-owner and one of the initial investors. I helped to provide capital and make sure that the company was well provided for so it could grow.”

With so many cupcake shops already in the market, finding a way to stand out proved a challenge for the upstart company. With stiff competition from more established cupcake shops, CupcakeStop found a way to distinguish itself by having a mobile retail location.

“We truly feel our cupcakes are the best-tasting cupcakes out there,” Kallman said. “We wanted to make a great product and be able to move around and deliver to people. We really wanted to be accessible.”

The accessibility of having New York City’s first gourmet cupcake food truck was enhanced by the company’s growth strategy, which emphasized a heavy reliance on social media.

Through Twitter and Facebook, the company alerted customers to where they could find the CupcakeStop truck as it traveled around New York.

In those travels, CupcakeStop was able to pick up fans, including celebrities such as Kelly Ripa and Joan Cusack, to name a few. The company has also worked with organizations including Victoria’s Secret, ABC Family, Gilt Groupe and Old Navy. However, it was the company’s victory in a Food Network competition that really aided its growth.

“I think the combination of celebrities and press helped us to grow,” Kallman said. “Winning the Food Network Food Feud for best (red velvet) cupcake in New York City really put us on the map nationally. Today the company has over 17,000 Twitter followers and 6,000 Facebook friends.”

One follower in particular, however, helped to bring the company to the next level. When General Growth Properties, a leader in the shopping mall industry with more than 160 locations across the country, approached Kallman, he felt it was another opportunity to expand the brand.

“General Growth Properties became fans of CupcakeStop and approached me about opening up another location at a kiosk in one of their malls in Staten Island,” Kallman said. “We always knew there was opportunity to expand. Strategically, this is the path I want to take with the company. There is a definite goal for eventually taking our brand national in the future.”

While Kallman has a wealth of experience from both his business ventures, he feels the blueprint for success transcends industries and companies.

“Like anything else, you take one day at a time, try to create great relationships and deliver a quality product with great customer service,” Kallman said. “That is the key to any business. My dad always told me to never give up and I apply that to all my business ventures.”

Determination alone, however, is not enough to ensure success, according to Kallman. Business owners who are multifaceted will ultimately be able to take advantage of opportunities and enjoy success, he said.

“You have to have some sort of appreciation for what you will be doing,” Kallman said. “You have to be well-funded, create a business plan and be prepared for that business plan to change dramatically. Gleam as much information from people who have experience and knowledge in an industry so you can become proactive and not reactive. I always say whatever advice you get listen to it. Even if it is advice you don’t need at that moment, it may come in handy later on.”