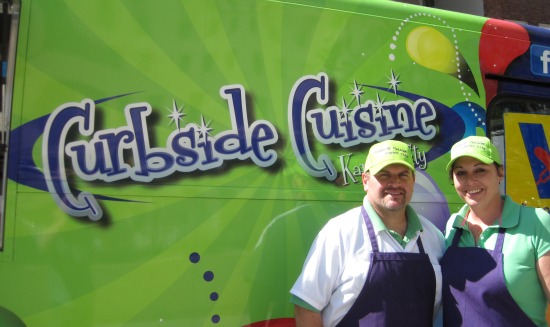 Meri Heyer admits that she was a bit worried when Curbside Cuisine, the food truck she runs and owns with her husband, Cory, pulled up to the curb on 13th Street between Oak and McGee last week. She didn’t have to worry long.

“We had five orders in the first three minutes,” Meri says, pointing to the office buildings a block over on 12th Street and Grand. “They said they noticed the truck from that far away, so I guess we’re doing something right.”

The truck, which began rolling on March 8, is easy to notice, painted in bold swatches of green and purple.

“Everyone asks if we have snow cones or ice cream. We don’t,” Meri says. “Maybe it’s because our truck has so much personality.”

​She’s got the personality to match — a bright, bubbly presence that makes her a natural for the window and register. Cory, whom Meri believes missed his calling, is working the griddle, fryer and steamer. He’s back in the kitchen again, remembering his first service-industry job at Apple Jack’s in Merriam.

“It was a steak and pork chops kinda place,” Cory says.

The Heyers had thought about starting a restaurant, but the expense of running a brick and mortar operation seemed daunting. However, Meri, who is from Long Beach, California, was familiar with the food-truck scene and thought they could bring something different to Kansas City.

After months of searching, the couple found a mustard-colored truck in Iowa that had been used by volunteer firefighters. Together, they completely tore out the inside and rebuilt the trailer, installing everything except the hood over the griddle. During the rehab, they took time off in February to get married. But their life changes weren’t complete. Cory left his job in loss prevention, and Meri left hers in collections to start the business.

“He can’t keep catching bad guys all his life, and I don’t want to be collecting bills for the rest of mine,” Meri says.

​Cory’s first love might have been the grill, and he’s been showing off his tailgaiting skills in the parking lot of Arrowhead Stadium as a Chiefs’ season ticket holder for the past 22 years. It’s where he has perfected some of the dishes on Curbside Cuisine’s menu, like the catfish po boy and the Philly Cheese Steak.

“I like to try exotic things. One game a year, we’ll usually try something like a wild game dinner. It’s definitely not your normal tailgate food,” Cory says.

​The Cheese Steak ($6.50) is Curbside Cuisine’s signature dish with sliced rib-eye loin served with Cheez Whiz, green peppers, onions and mushrooms on a hoagie roll. Although it’s the Chicago-style hot dog ($3.50) that is causing people to pull their cars over and run up to the window. The Vienna beef dog is steamed and then topped with a sliced tomato, onion, neon relish, sport pepper, mustard, kosher pickle wedge, and a dash of celery salt packed into a poppy seed bun.

“I’ve taken trips to Chicago just to get a hot dog,” Meri says.”Sometimes you just need a hot dog.”

There are also hamburgers, chicken sandwiches, and salads. The couple intends to adjust the menu with the weather, adding scratch soups to pair with a grilled cheese. And don’t be surprised to see specials that are not your average food-truck fare — such as Cory’s bacon-wrapped duck breast with jalapenos.

“Our idea is to take the best food from around the country and put it in one truck,” Meri says.

The only things frozen on the menu are the onion rings and french fries. Everything else is made to order or hand-breaded, like the pork or chicken tenderloin sandwich. The Heyers are excited to see a burgeoning food-truck culture in Kansas City and believe that it might have some unexpected benefits for downtown.

“Food trucks bring people out and get them talking to each other. You could have a bail bondsman next to a corporate bigwig in line,” Meri says. “And when we get together, that makes us better people.”

The truck is licensed in Kansas City, and Clay and Platte counties. Curbside Cuisine can be found in downtown Kansas City and north of the river six days a week. The truck isn’t rolling on Sundays. For a real-time location update, follow their Twitter feed (@curbsidecuisine).

“I thought it was going to be fun,” Meri says, and then pauses before breaking into a wide grin. “It’s a lot of fun.”