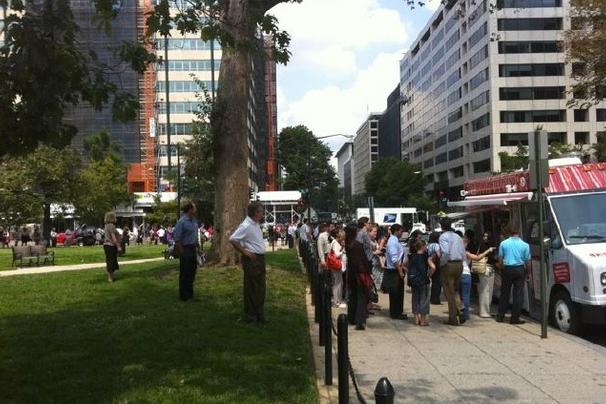 Food trucks have proliferated in D.C. in recent years, at such a rate that they can no longer be considered a fad. But their popularity has put them at odds with bricks-and-mortar restaurants and business improvements districts, and has left the city scrambling to update its regulations. One local attorney, seeing this tension, has started a nationwide fight in defense of street food.

Bert Gall is a senior attorney at the Institute for Justice, a libertarian public-interest law firm in Arlington (and a good friend of Thomas MacDonald, co-owner of the DC Slices truck). As the Post reports, Gall has been busy in places like El Paso, Chicago, and Atlanta. But what about here in D.C.? A recent report by the firm highlights the hurdles food trucks face here:

The complexity of many cities’ vending codes can even confuse the bureaucrats charged with administering and enforcing them. A popular burrito cart in Washington D.C., Pedro and Vinny’s, decided to open a second location. Weeks after getting a license, District officials forced the cart to close because, according to them, its owners had not gotten a necessary public-space permit. But when the owners of the cart called, they were told they did not need the permit after all. Even worse, the cart had to shut down when D.C. regulators said that they had erred in granting the cart a vending license in the first place.

The Institute for Justice surveyed food-truck customers in D.C. and found that more than 60 percent of respondents — 41 out of 66 — patronized trucks for reasons of “variety or novelty. The study also found that “the presence of a food truck did not drastically increase foot traffic.”

Meanwhile, the D.C. Department of Consumer and Regulatory Affairs has been working for two years on updating food-truck regulations. The delay is partly due to the 2,500 public comments received, all of which must be reviewed by officials. From the Post:

The DCRA acknowledges that the new regulations, whenever passed by the council, will be reviewed mercilessly by all sides: vendors, restaurateurs, Business Improvement District officials, the Institute for Justice, whoever, all looking for reasons to cry foul. “It pays to be deliberate in these circumstances,” says Samuel Williams, the DCRA’s administrative officer. “We know there’s plenty of other folks out there who [will review] what we’re going to propose with a fine-toothed comb.”

So while we admire Gall for taking his fight to a national level, we do hope he’ll focus his energy on the District when the time comes — when our right to eat cheap street food, and to get indigestion from it, is threatened.