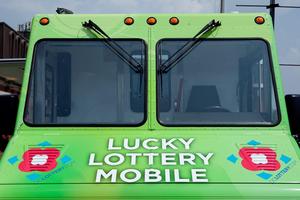 By Amy Myers | Special to The Washington Examiner

The D.C. Lottery truck is finally on a roll, as two District agencies have ruled that the vehicle can park on city streets and alongside squares even though it’s 7 feet over the legal limit that applies to other mobile vendors.

The 26-foot-long Lucky Lottery Mobile was at the L’Enfant Plaza Metro station on Thursday, selling lottery tickets and redeeming winning scratch-offs for cash at the truck. This came after the Department of Consumer and Regulatory Affairs and the Department of Transportation agreed the city’s regulations will not apply to the lottery truck.

“We initially said there could be some issues there because of the size,” DCRA legislative affairs specialist Helder Gil told the Washington Examiner on Thursday.

Chapter 5 of Title 24 of District regulation requires mobile vendors be under 18 feet, 6 inches. But the D.C. Lottery argued that the restrictions only apply to trucks selling food, not items like lottery tickets, and they should be exempt.

Gil said his agency has only ever licensed vendors that sell food and, like a delivery truck, the D.C. Lottery truck did not require a license from the DCRA.

The lime-green truck was scheduled to make its initial appearance at Farragut Square, a major food truck hub, on July 12. But the D.C. Lottery’s chief operating officer, Tracey Cohen, said at the time that the truck was being limited to appearances at special events because of its length.

Now it can cash in on the food truck craze as planned by parking alongside the city’s squares and selling lottery products to the huge lunch crowds drawn by the meals-on-wheels mobiles.

According to D.C. food truck consultant Kyle Johnson, the Lucky Lottery Mobile is using outdated regulations to its benefit. The vending laws were designed to regulate old ice cream trucks and have not been updated since.

Innovative trucks in the District can skirt regulations, Johnson said, and what laws — if any — the non-food vendors must follow is unclear.

“It still does seem like the D.C. Lottery truck is getting a special pass to be able to vend,” Johnson said.

This year’s summer pilot program raked in $20,000 in the lottery truck’s first four stops, Cohen said. But the truck cost $32,600 to lease through Sept. 30 from a Maryland caterer.

Still, Cohen said, the lottery truck was a huge success, though no plans for next summer have been finalized.

“D.C. Lottery knows what we now need to do is to get out and engage the people,” she said.