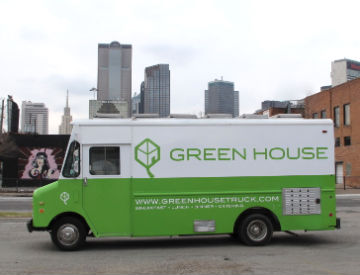 t the streets of Dallas

Have you spotted a pig pitching grilled cheese sandwiches from a truck lately?

You are not seeing things — creative dining is catching on in Dallas in the form of gourmet food trucks.

This trend started on both coasts in Los Angeles and New York and has arrived in Dallas.

Stephanie Hawkes, Dallas food truck fan and creator of the blog dfwfoodtruckfoodie.com, explained that this new fad is catching on, and food trucks have to keep a competitive edge. They are doing so by offering flavorful, diverse food in interesting ways.

“Everyone is trying to do something unusual,” Hawkes said. “There’s not a lot of just American hamburgers and hot dogs anymore. Everything is becoming more specialized.”

Hawkes, who started her food truck research in July, has seen her fair share of trucks.

Since she started following food trucks, Hawkes said the numbers of trucks in Dallas has grown due to their popularity and an improved permitting process.

With a base of approximately 30 trucks rolling on the streets today, that number is expected to increase by as much as six in the next month.

One of Hawkes favorite trucks is Nammi, known for their Vietnamese fusion cuisine. “I love their food and people that run it,” Hawkes said.

One of the popular trucks Hawkes has visited is Ruthie’s Rolling Cafe Known for their gourmet grilled cheese sandwiches, this truck is growing in popularity, especially within the SMU community.

“We are trying to work something out with SMU,” Ashlee Kleinert, owner of Ruthies, said.

For now, students can find the truck during boulevarding hours at the Bank of Texas, located next to campus across Hillcrest.

They also have an agreement with SMU student weekend

“(Ruthie’s Rolling Cafe) parks in the bars’ parking lots, and as long as we don’t sell drinks…then they are allowing students to buy grilled cheese (sandwiches) from us and eat it inside the bars,” Kleinert said.

Kleinert started the food truck before the improved mobile food permitting process. It took her several tries and an extended period of time to receive a permit, but now the truck can sell their gourmet sandwiches all over the city.

Kleinert said that food trucks have established their own local community of sorts, helping each other with the permitting process or finding mechanics to fix trucks.

“It is such a supportive group,” she said.

Trucks that have started more recently have received help from city officials throughout the process.

The 3 Men and a Taco food truck recently received a permit and the owners were impressed with the guidance and support from the city.

“(Dallas City Hall) sent someone to help us,” owner of 3 Men and a Taco Olivia Risner said. “They were really helpful through the whole process.”

One of the unique aspects of food truck dining is locating your favorite trucks. Most trucks use their Twitter and Facebook accounts to let their followers know where they are going to be.