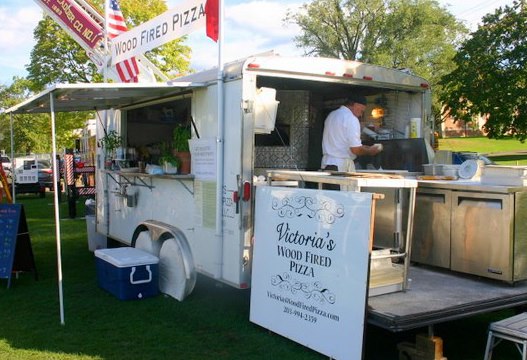 DANBURY, Conn. (AP) — For years, friends and family would tell Bruce Lyon how much they loved his wood-fired pizzas, and would urge him to open his own restaurant.

Several years ago, he took their advice. But rather than making a large investment in a brick and mortar business, Lyon decided to put his kitchen on wheels.

‘‘Most kitchens have a foundation underneath them,’’ said Lyon, who had worked for more than a decade in the real estate industry before opening Victoria’s Wood Fired Pizza and Catering. ‘‘But when your kitchen has wheels underneath it, that creates a whole new set of challenges. There is no store room in the back. You have to be economical and highly organized.’’

And while it has its own unique set of challenges, the food vending and catering business also has lots of perks. The business, Lyon noted, is limited only by your imagination, your abilities and your client base.

‘‘The key components for the vending business is knowing the health regulations, knowing your own limitations and understanding your market,’’ Lyon said.

After several years of research and then building his own rig, Lyon launched the business two years ago, making authentic Neopolitian pizza at farmers markets and other places.

This year, Lyon had more than 90 bookings, from birthday parties to corporate events and weddings, and more than half of that are already booked for next year.

‘‘Next year, I have at least one event planned for just about every month already,’’ he said. ‘‘The business has really exploded.’’

Unlike many of his competitors, Lyon has his oven inside the truck, which means he can offer wood-fired pizzas for customers in just about any weather, short of a hurricane. Other pizza trucks in the region require the cook to be standing outside the rig.

There is also a variety of regulations surrounding the industry that can vary depending on the town or state where entrepreneurs expect to do their business.

‘‘In Danbury, the vendor has to be in an area that’s zoned for what they are providing and they have to have permission to be on either public or private land,’’ said Scott Leroy, the city’s health director.

The vending carts are inspected annually by the department, Leroy said, adding that people who work on the cart are required to have the state’s qualified food handler certification that can be obtained through a one day course and examination.

Inspection and permit fees can run into the hundreds of dollars, he added.

Tony Candullo, who runs a hot dog cart on the northern end of Main Street in Danbury, started the business about five years ago after working nearly five decades as a mason.

‘‘Running a hot dog cart is something I’ve always wanted to do,’’ said Candullo, who is semi-retired. ‘‘The more time you put in, the more money you can make. I do it because I love the people, but if I put in more hours it could be a very profitable business.’’

Like many vendors, Candullo usually closes up shop during the winter time.

Other vendors have part-time jobs during the winter months to make ends meet.

Lyon said that while he can work during the winter with his wood-fired oven, it’s wedding deposits that help him pay the bills in the colder months.

‘‘Winter work can be very sparse,’’ he said. ‘‘But on the flip side, I’m usually spending Presidents Day weekend taking my daughter skiing.’’