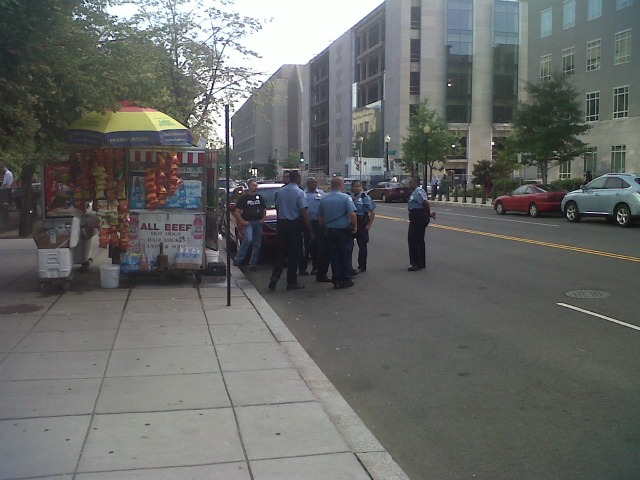 Yesterday, we posted the above photo and wondered why more than a handful of officers were needed to handle an issue with a hot dog cart near the Federal Center SW Metro station. Turns out it was probably an exercise.

Food Truck Fiesta reported yesterday that the Metropolitan Police Department held a large-scale training exercise yesterday, which involved several officers visiting various food truck and cart hotspots around the District and inspecting the vehicles. A source with the city government who frequently deals with food trucks told DCist that the training program was “an all-MPD thing” and that the police department is “trying to get more officers trained in specifics of food truck regs.” That would certainly explain why police were unable to tell us anything further about the incident near Federal Center SW yesterday; if it was an exercise, it likely didn’t make the activity log.

The bigger picture: it’s probably a good thing that police officers are being educated in the proper procedures with food trucks, though one wonders if the best way to pursue that education is to swarm on trucks with several officers and cruisers in the middle of peak eating periods.